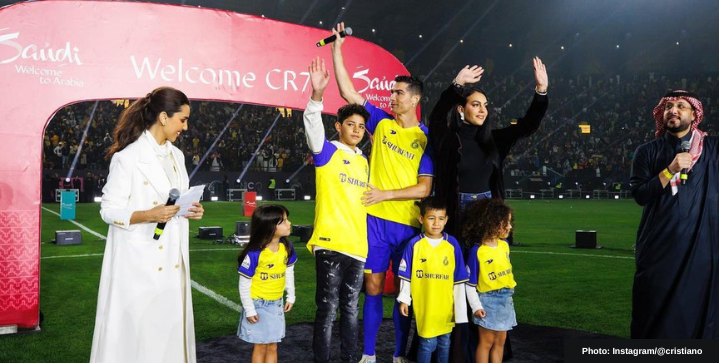 Al Nassr’s newest WAG Georgina Rodriguez will have to break the law if she wants to live with partner Cristiano Ronaldo in Riyadh.

According to strict Saudi Arabia rules, it’s illegal for unmarried couples to live together in the same home. Unmarried foreign couples, however, can legally room together in a hotel.

But Saudi Arabia seems to be turning a blind eye to the Ronaldo-Georgina relationship because, well, it’s Ronaldo. So the lawyers won’t need to get involved, and the lovers are off the hook for now.

The couple has been together since 2016, after the pair met at a Gucci store in Madrid. They share five children, three born from surrogate mothers, including the eldest, Cristiano Ronaldo Jr.

Nassr’s new number 7 gave the club an immediate social media boost, raising the team’s followers from 500k to over 8 million in just a week. Ronaldo’s presentation at Al Nassr’s Mrsool Park stadium was also viewed by more than three billion people across the globe.

Ronaldo is still waiting to make his much-anticipated debut for his new side.

He’s currently serving a two-game ban for unruly behavior shown to a 14-year-old fan during his second stint at Manchester United.