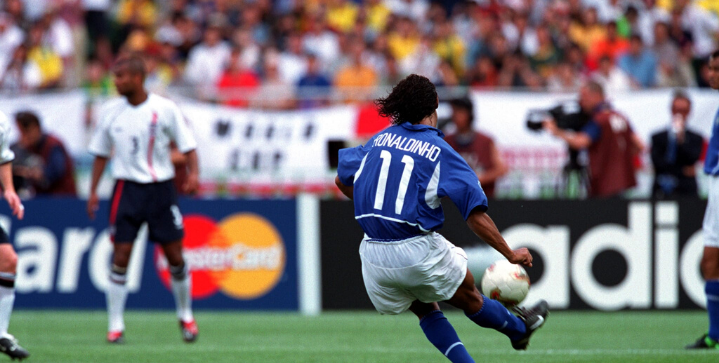 The Brazilian footballer Ronaldinho scored over 300 goals in his career for club and country. While known for his playmaking abilities as well as his bag of tricks, he was also a deadly set-piece specialist. Here we highlight our favorite Ronaldinho free-kick goals of all time.

A well-known trickster, Ronaldinho spotted David Seaman come off his line during his free-kick in the 2002 World Cup and abruptly smacked a curler 40 years into the left corner. Brazil went on to win the World Cup with teammates Ronaldo and Rivaldo, known as the “Three Rs.”

In a glorious free-kick from 25-feet away against arch-rivals Real Madrid, Ronaldinho smashed it pass legendary goalkeeper Iker Casillas. Like a speeding bullet, the Brazilian hit the ball so hard Casillas never even had a chance to react.

Even at the closing stages of his career, the ever-creative Ronaldinho could score a cheeky one. Posing to the Santos as if he’s going to blast it, he tucks it underneath the jumping wall of defenders to slide it home.

In his first year with Barcelona, Ronaldinho whipped around the Mallorca defense a curling free-kick to help his side win 2-0. The goal was just the beginning of the 94 goals Ronaldinho would score for the Catalan side through his five-year tenure.

Ronaldinho sealed the win for the Blaugrana in the 85th minute with a strike so full of power and swerve it ripped past the goalie into the top right of the goal. Game, set, match.

In a Champions League group stage match against German side Werder Bremen, Ronaldinho tricked the wall into thinking he was going to blast it above or around them and instead sliced it slightly around and underneath.

In a 2007 match against Real Betis, Ronaldinho sent a stunning curler from 35 yards out to put the ball into the upper right side of the net. The speed of the kick left the goalie no chance but to grab a whiff of it whipping by.

In a La Liga match against Deportivo La Coruña, Ronaldinho took one step before nailing a free-kick into the left side of the net. With power and placement, the ball spun out of his foot into the goal like a ball of yarn.

Lord of the free-kick, Ronaldinho acted like he was going to hit the ball right only to smash the ball to the left corner of the goal. He was known for his mastery of the body feint while dribbling.

Ronaldinho helped seal the victory over Real Betis with a free-kick in the final minutes of the match. The belter had all the elements of a Ronaldinho goal, including the kiss off the inside post. Barcelona’s win brought them within one point of Real Madrid.

Ronaldinho could strike a ball with venom even in his later years. Against Portsmouth in a 2008/09 UEFA cup match, he torpedoed a 30-yard free-kick over the wall and curled it into the right side of the net. Swish.