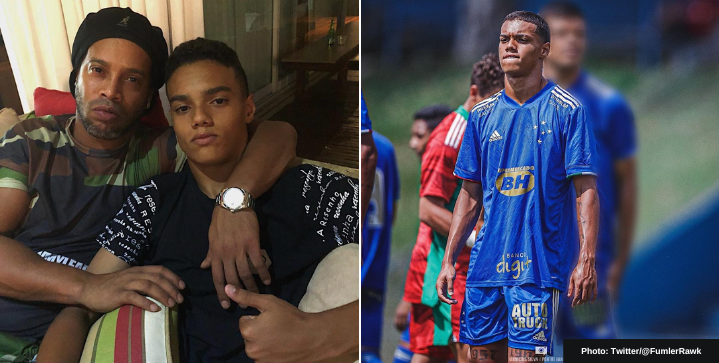 Ronaldinho’s son Joao Mendes is undergoing a trial at Barcelona.

According to Diario SPORT, Joan Laporta is working closely with Ronaldinho to make the kid an official signing for Barcelona’s youth team, Juvenil A.

Ronaldinho currently serves as one of Barcelona’s key ambassadors.

Can Ronaldinho’s son succeed the Brazilian icon at Barcelona?

Those who’ve seen Joao play say he’s a “huge talent.” But the teenager who’s got dreams of following in the footsteps of his father has big boots to fill.

Ronaldinho is one of the most talented footballers of all-time and certainly one of Brazil’s finest, a winner of the 2002 World Cup.

The razzle-dazzle extraordinaire embarrassed his opponents with his dribbling skills and deceived goalies with his free-kicks.

The Brazilian icon notched nearly a century of goals for the Catalan side, wrapping up the Ballon d’Or and FIFA World Player of the year after winning the Champions League and his second La Liga title in 2005.

Joao previously trialed at PSG, also his dad’s former club, before trying to make it at Barca.

Can Joao continue the family legacy for the Blaugrana?