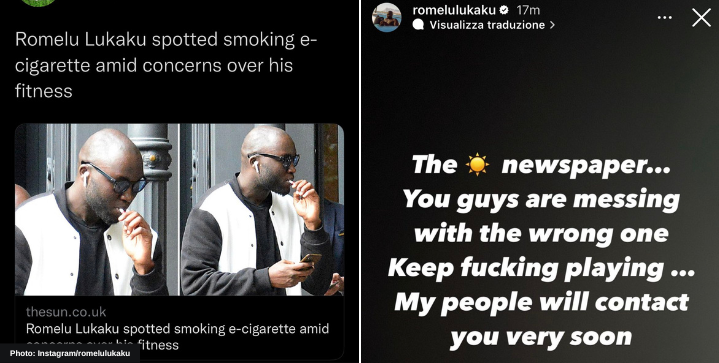 Inter Milan striker Romelu Lukaku has called out The Sun for false accusations. The newspaper featured an online article claiming that Lukaku was “spotted smoking e-cigarette.”

The Belgian quickly denied the rumors on his Instagram account, saying “The Sun Newspaper…you guys are messing with the wrong one…Keep F*cking playing…My people will contact you very soon.”

“You guys are lame as f*ck for posting a picture that ain’t me and posting the wrong info,” the player rebutted.

The Sun deleted their tweet to the article earlier today and apologized to Lukaku. But the damage has already been done to the tabloid and its journalist Giacomo Pisa for his racist remarks.

The article also accused Lukaku of being in poor physical shape. The 29-year-old just returned to training yesterday about dealing with a lingering injury from August 28th.

A return to form should be enough to stem the media critics and get Inter back into Serie A’s top four.

Will Lukaku stay at Inter Milan for another season?

Lukaku’s second spell at Chelsea only lasted 321 days before he returned to Milan.

The two clubs are in talks to extend the player’s loan another year.