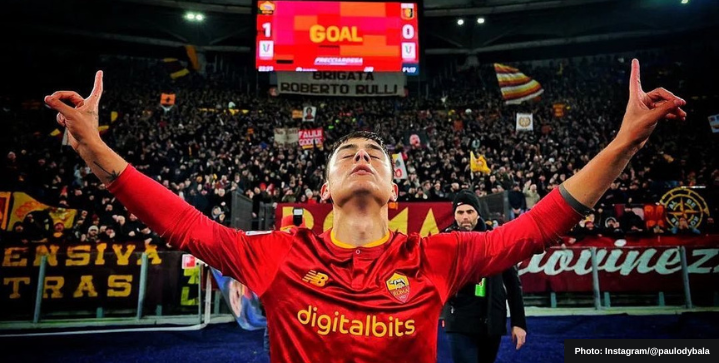 World Cup champion Paulo Dybala has been in excellent form since joining AS Roma earlier this season.

The ever-popular and handsome Argentine has quickly become a fan favorite in Rome — after all, he beat Ronaldo’s Serie A record for most kits sold in 24 hours upon his signature.

The Argentine signed for Jose Mourinho’s side on a free transfer last summer, penning a three-year deal with Roma with the option to extend. The Italian giants are now determined to secure the player’s future.

After scoring a brace in last night’s two-nil victory over Fiorentina, AS Roma are preparing a new deal for the 29-year-old gem.

The Giallorossi are trying to nail down La Joya long-term to stymie interest elsewhere — Dybala is consistently linked with Premier League clubs Arsenal and Tottenham.

AS Roma are ready to open talks with Dybala by offering him an extension to 2026 at $6.5 per year, twice his current salary. The new deal makes him the team’s highest-paid player. The Romans also want to nullify the release clause of $22 million.

Roma’s new number 10 is clearly a game-changer. He’s scored ten goals in just 16 matches this term; when he’s fit, he’s indispensable to Mourinho’s side. Roma sit seventh in the Serie A Table.

“But with Paulo this is easier,” admitted the Special One after yesterday’s match.

“Paulo Dybala is a player who makes the team and the coach better, there is teamwork, but Paulo is something else, he has a different flavor.”

Dybala also sent Roma to the Italian Cup quarterfinals with a second-half striker by the forward last week.

Roma fans, is this new Dybala contract a no-brainer?

Newcastle going back to Adidas as kit supplier?