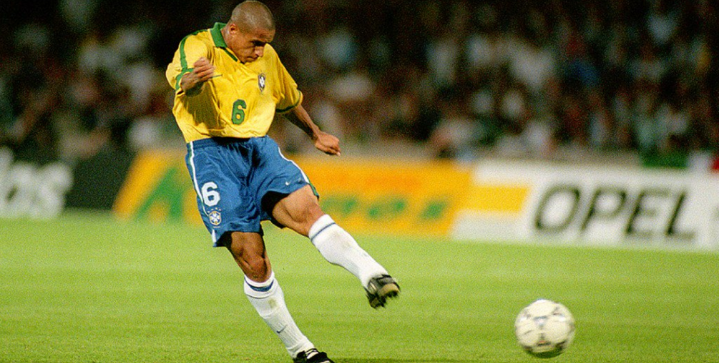 Part of the Real Madrid Galácticos that ushered in star players from overseas, Roberto Carlos played 527 times for Los Blancos, making his name as one of the best left-back in history. The Brazilian defender also made a name for himself as a free-kick specialist, known for blasting rockets at goal. These are some of our favorite free-kicks from the Brazilian man.

Known for a thunderous left foot, it’s no surprise that Brazilian Roberto Carlos makes it at the top of the list one of the best free-kicks. His 35-yard blast against France in a friendly has been doing rounds on the internet for nearly two decades. We suspect that people will be talking about this curler for many more decades to come.

While he only spent one year with Inter Milan, the Brazilian defender still found a way to issue his trademark blast. This one against Torino looks to be propelled by rocket fuel.

From approximately 35 yards out, the left-footed tyrant smashes it all the way into the right corner of the goal after it putters the ground twice. Yet another from the Robert Carlos cannon.

In a Serie A match against Lugano during the 1995/96 season, Robert Carlos sent in a thunderbolt that cut the grass on its way to going to the back of the net. Watch the goalie claw at thin air.

With extreme velocity, Robert Carlos ripped a shot into the top right corner passed the Atletico Madrid goalkeeper. David Beckham and Luis Figo saw it up close and might still be in awe.

In the 5th minute, Robert Carlos ignites his side by scoring the first goal from a thunder strike. The Barcelona goalie gets a hand on the ball too little too late.

In a World Cup qualifying match against Argentina in 2006, Robert Carlos scored a screamer that gradually kept rising until it landed into to top left shelf.

With a running start the Brazilian fires the ball from about 30 yards out with a trajectory that skims around the wall and finds its home in the top left of the net.

From about 40 yards out, Robert Carlos sends home a low and hard screamer that makes it ways into the bottom left corner of the net.

That’s one way to introduce yourself to your new team. In what his first goal for Real Madrid, Roberto Carlos sent in a curving set-piece kick with hypersonic speed from about 30 yards out.

In what was one of his last free-kick goals for Los Blancos, his teammates helped him line one up in just outside the 6-yard box where he blasts it into the top of the net over the entire Real Betis team.

Imagine standing in the way of this Roberto Carlos free-kick! pic.twitter.com/vNBG38nFVF