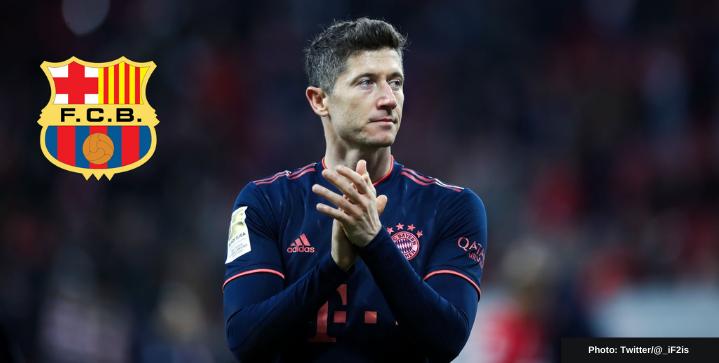 Robert Lewandowski could be headed to Barcelona this summer.

According to reports in Poland, the star striker is inching closer to a personal agreement with the Catalan giants on a “multimillion three-year contract.”

Xavi is playing a pivotal role in the negotiations, having sat down and talked with Lewandowski about finishing his career at Camp Nou.

The 33-year-old, who placed second in this year’s Ballon d’Or despite scoring 41 record-setting Bundesliga goals last season, remains interested in a change of scenery. The player’s contract with the Bavarian giants expires next season.

Lewy was linked with a £50m to Chelsea just last summer.

“I still have an open mind and I feel good at Bayern, Munich is a wonderful city and it’s a massive club. I have, however always had a curiosity to pick up a new language and experience a new culture but I don’t know if that is something that will happen during my playing career or later in life,” Lewandowski told Canal + last July.

Lewandowski has had a move to La Liga in his head for the past decade — and a move to Spain could improve his chances of finally winning a Ballon d’Or. The forward nearly signed for Madrid during the 2012/13 season after impressing Florentino Pérez with four goals against Los Blancos in a Champions League match. During this season’s transfer window, Lewandowski asked his agent Pini Zahavi to prioritize a switch to Real Madrid.

But with Real Madrid focused on signing either or both of Erling Haaland and Kylian Mbappe to kickstart a new Galacticos era, Lewandowski now sees a better opportunity at the La Liga rival.

The Blaugrana, still in a cash crunch, view Robert Lewandowski as a viable backup option to Haaland. The 21-year-old Norwegian would also cost nearly four times the price Barcelona are willing to pay in transfer fees for Lewandowski.

A move to Camp Nou would also reunite Lewandowski and Pierre-Emerick Aubameyang, who played together at Borussia Dortmund during the 2013-14 season. The Pole’s signature would most likely mean the departure of Luuk De Jong, who’s on loan from Sevilla.

Where do you want to see Robert Lewandowski play next season?