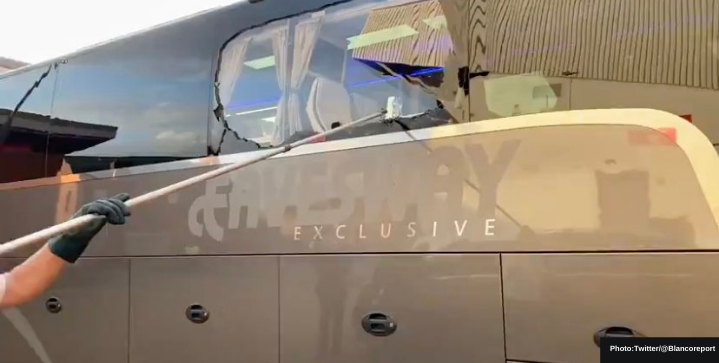 Liverpool fans threw stones and bottles at the Real Madrid bus, including one that smashed the window next to where Zidane was sitting.

There were no injuries reported after the act.

“We condemn unequivocally the actions that led to Real Madrid’s team bus being damaged during its arrival to Anfield this evening. It is totally unacceptable and shameful behavior of a few individuals,” said a spokesperson apologizing for Liverpool.

Real Madrid take on Liverpool in the second leg of the Champions League quarterfinals today at 3 PM Eastern (Live on Univision, TUDN, Paramount+ and fuboTV.

Jurgen Klopp mentioned in the pre-game press conference that overcoming a 3-1 deficit to Los Blancos would be impossible without a stadium of supporters.

Liverpool pulled one of the best Champions League comebacks of all time when they scored 4 goals at Anfield to defeat Barcelona 4-3 on aggregate in the 2018-2019 semifinals.

The Reds defeated Tottenham at Wanda Metropolitano in Madrid to become the champions of Europe.

Real Madrid bus has been attacked by Scouses in Liverpool & a window where coach Zidane was sitting broke through stones being thrown.