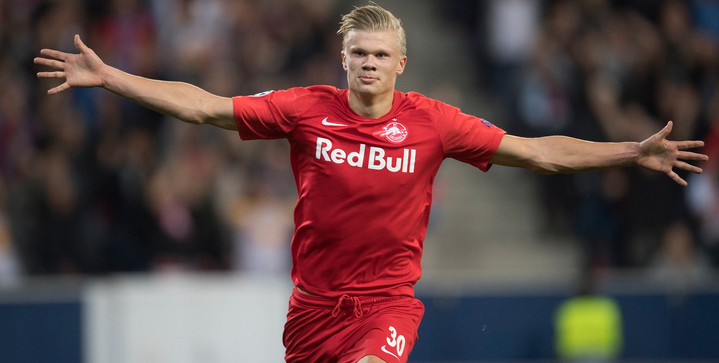 According to AS, the 6 foot 4 Norwegian scoring machine is on Zidane’s radar after scoring 18 goals in 11 matches for Red Bull Salzburg.

It was only a few weeks ago after netting a first-half hat-trick on his Champions League debut that Haaland gained the attention of Manchester United. The Norwegian played under Manchester United boss Ole Gunnar at Molde in 2017.

“The media attention is huge,” said Haaland. “It’s good pressure. The club is good at shielding me a little, but I hope it will be more shielding in the future. It will be difficult, but we will try. I want to be shielded.”

When asked about the transfer speculation to Old Trafford, Haaland quipped: “It’s f*cking boring. I’m bored now. How bored on a scale of 1 to 10? 9.9.”

Where will the Norwegian striker end up?

Real Madrid are looking for further reinforcements to add to an already dynamite attack in the final third. The club also sees Haaland as a long-term replacement for 31-year-old Karim Benzema.

But Manchester United and Real Madrid aren’t the only ones with their sights set on the teenager. Napoli and their Serie A rivals Juventus have also entered the transfer race.

The bidding wars for the Norwegian are just beginning to take shape.