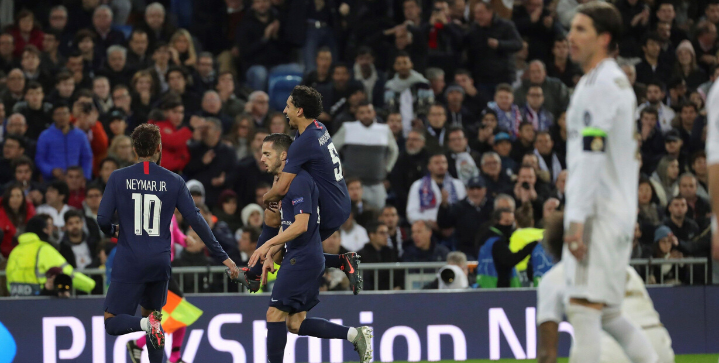 Paris Saint-Germain scored two goals in three minutes in the second half to earn the draw in what was otherwise a dominant display from Real Madrid.

With the tie, PSG snatched first place in Group A with a game left to play. Meanwhile, Club Brugge’s draw against Galatasaray earlier in the day advanced Los Blancos to their 23rd consecutive Champions League knockout round.

Here are 5 things we took away from a classic Matchday 5.

It’s been a slow start for Eden Hazard at Real Madrid. However, the last few weeks have been more promising with only goals lacking.

Tonight, Hazard was back to the scintillating form often seen in his Chelsea days. He played PSG off the park for most of the match, teeing up the game’s first goal scored by Karim Benzema. He even nutmegged the referee on the buildup.

Don't sleep on Eden Hazard nutmegging the referee in the build-up to Real Madrid's goal 👀 pic.twitter.com/R5QFcB6Tu7

But just as Hazard’s masterclass was reemerging, his Belgium team-mate Meunier took a swipe at his ankle and injured him. Cameras showed Real Madrid’s newest star limping off the pitch in pain. The knock should put him out of the season’s first El Clasico with a minimum of 4-6 weeks needed for a full recovery. Ouch.

2. Benzema is the complete striker

What else can we say about Karim Benzema? The decade-long Real Madrid man is possibly the world’s most underrated striker. Tonight, on what was his 100th Champions League start, he added two more strikes to give him 64th UCL goals. Only three players have scored more than Benzema in the Champions League: Ronaldo (127), Messi (113), and Raul (71).

“It was a great game for us and we are on the right path,” said Benzema after the match. But the team’s second-half capitulation put a dent on the Frenchman’s brace. “The result wasn’t good because we always wanted to win. We are playing together, as a team,” he added.

Benzema has contributed 20 goals (14 goals and 7 assists) in 17 appearances so far this season.

🗣️⚽️ Tonight's goalscorer @Benzema: "It was a great game for us and we are on the right path." #RMUCL | #HalaMadrid pic.twitter.com/wLvXomqfN9

It’s still difficult to fathom why Zidane preferred Thibaut Courtois over the Keylor Navas. The Costa Rican was forced out of Madrid and signed a four-year contract with PSG last September.

Navas made ten clutch saves tonight that kept his team from going down in a 4-0 deficit. “Keylor Navas played his game. We know him. That’s that,” said a terse Zidane after the match.

“The Real Madrid fans showed me a lot of love. I thank them from the bottom of my heart because with them I lived incredible things,” said Navas who earned cheers from Madridistas after the match.

4. Madrid getting better under Zidane

After a poor opening to the start of the season, Zidane’s job appeared to be in the hot seat. However, with fresh signings like Hazard and Rodrygo up and running and tactical shifts made by the Frenchman with four midfielders and two strikers, Los Blancos are looking like the team that won the Champions League in 2017 and 2018.

On top of Benzema playing goal provider, it was really the combination of Fede Valverde and Isco as part of Zidane’s diamond who added pressure and creativity to Real’s game. “Isco is a part of the squad and tonight he was phenomenal,” remarked Zidane. “Football is like this. Playing like this, it’s okay, really. I liked everything and everyone. With attitude, playing well – it was a show.”

But it only took one defensive lapse to let PSG back into the match. Kylian Mbappe, Zidane’s infatuation, and Sarabia scored 2-minutes apart to cancel out Benzema’s brace and help PSG finish 1st in Group A.

👔💬 This is what #Zidane had to say after our match with @PSG_English. #RMUCL | #HalaMadrid pic.twitter.com/mpJ2CbBpU2

PSG hadn’t conceded in the Champions League this season until Benzema’s brace in tonight’s match.

But behind the stellar display of Keylor Navas and a crafty Neymar who came on in the second half, PSG were able to stay in the game and score two goals in three minutes to capitalize on a dazed and confused Madrid who nonetheless dominated 80 minutes of the game.

“We didn’t play our best game. We didn’t start to play with our own qualities. We didn’t play with confidence and courage, in contrast with a side which recently won the Champions League three times. It was very tough for us,” admitted Tuchel.

PSG will be satisfied to take the tie and win Group A, especially with Gareth Bale’s near-winner in the 94th minute.

It doesn't get closer than this 😬 pic.twitter.com/zy2aOD4llu