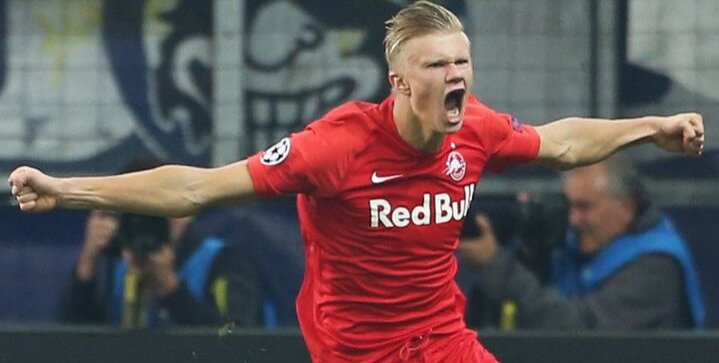 In doing so, Håland became the first-ever player ever to net a hat trick (2nd, 34th and 45th minutes) in the history of the tournament and the second teenager after Wayne Rooney to bang in a trio of goals on his Champions League debut.

The 6 foot 4 Norwegian has been in beast-mode this season, scoring 17 times in nine appearances in the Austrian Bundesliga, including four trebles. With four assists, he’s been directly involved in a team goal every 37 minutes. Unreal.

Håland also became a viral sensation when he netted an astounding nine goals in a single match against Honduras in his last U-20 game for Norway.

Is a Manchester United move in the cards?

It comes as no surprise that Manchester United are renewing interest in the teen.

“It was nice watching the game last night,” Solskjaer said after Håland’s debut on the European stage. “But my focus obviously is on the game tomorrow [against Astana]. It’s great watching him and I think everyone in Norway is excited by his development.”

If would be something for the two to link up again at Old Trafford, especially since Håland’s father, former Nottingham Forest, Leeds and Manchester City defender Alf-Inge Håland, was famously injured by Solskjaer’s old teammate Roy Keane.

“He is probably not the world’s biggest Manchester United fan,” said Solskjaer once while in charge of Molde. “But if they come to the door, there are not many who say no to that.”

According to the Daily Mail, Håland’s father would be ok with that.

“It is important to distinguish between being a supporter and a job. So I have a very relaxed relationship with that. It’s a little different when it’s serious. Yes, I think most players dream of being in the Premier League at one time or another. It’s the league that gets the most attention around, and it has very good quality teams. There is no doubt the Premier League is attractive to him.”