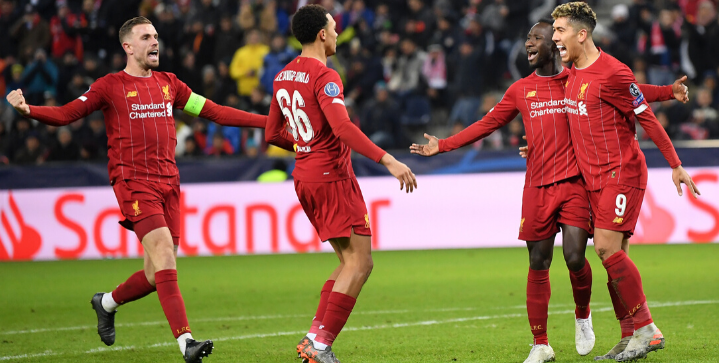 Liverpool survived a lively Salzburg side to advance to top Group E and secure their spot in the Champions League Round of 16.

Here are five things we took away from the Reds vital win in Austria.

1. Salah nets from an impossible angle

Mohamed Salah may have missed easy chances against Salzburg, but he made the hardest one count.

In the 58th minute, Salah darted around Salzburg keeper Stankovic and squeezed it in from the goal-line. It was the Egyptian King’s 200th goal of his career at club and country.

Salah had nine shots against Red Bull Salzburg, producing the second-most shots in a UCL game this season. Three of them were on target.

Salah has been involved in 27 Champion League goals since joining Liverpool, second behind Lionel Messi.

The former Red Bull Salzburg players Sadio Mane and Naby Keita combined to give Liverpool the lead against the Austrian side.

In addition to his finesse header, Keita’s second goal in two consecutive matches, the 24-year-old Guinean looked composed under pressure and put in another all-around midfield performance. If Keita continues to deliver in the absence of an injured Fabinho, he should be in consideration for a permanent starting role.

Meanwhile, Sadio Mane is in the form of his life. He created four chances, succeeded in five of nine of his dribbles, and won half of his aerial duels. Recently finishing fourth in the Ballon D’Or voting, the Senegalese winger must be considered one of the top 3 players in the world.

“It was like a heavyweight fight,” said Salzburg boss Jesse Marsch after the match. The first 55 minutes of the match could’ve gone either way.

But Klopp made two tactical tweaks to set up Liverpool’s attack in the second half. And it took Liverpool just 2-minutes of madness to turn the game around.

Klopp deployed Salah down the middle and moved Firmino into a sweeper role to win the ball back and create attacks for Mane and Salah. The two subsequent goals broke Salzburg’s spirit, and Liverpool’s control of the game ensued.

Erling Håland failed to score in a Champions League game for the first time in his career.

The teenage sensation Erling Haaland had scored in all five of his first Champions League matches, notching a total of 8 strikes.

But the future is ever-bright for the 19-year-old Norwegian. Manchester United, Liverpool, and Real Madrid will be chasing for his signing, perhaps as soon as this January.

The wonderkid won’t come cheap though, with a price tag that could exceed €100 million. To put that fee in perspective, Manchester United boss Ole Gunnar Solksjaer signed Håland for Molde for a mere £180,000 in 2017.

With 13 points, a point above Napoli, Liverpool finish first in Group E and go through to the knockout stages for their third straight season.

But it wasn’t easy, as the squad had to fight a young and ruthless Salzburg squad in the first 45 minutes. But Liverpool once again showed their mettle in a must-win situation.

The Reds are gelling at the right time in both the Champions League and the Premier League, vital for a team that will play ten matches in 33 days.

Tonight’s away win also ensured that the Reds remain the only unbeaten team in Europe’s top five leagues.