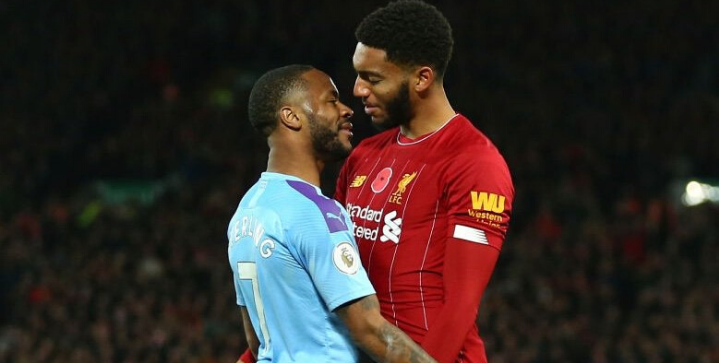 According to The Athletic, Raheem Sterling tried to put fellow England international Joe Gomez in a headlock during their brief altercation at the team’s training center on Monday.

Both players were involved in a late-game scuffle on Sunday in Liverpool’s clash against Manchester City at Anfield. Liverpool won the match 3-1 and moved up eight points clear of the Citizens in the title race.

Watch the heated moment below.

Gomez was seen to be laughing with teammates before Sterling interrupted the greetings in a combative manner with “you think you’re the big man now?”

Teammates had to separate the two players after the 10-second incident. Gomez appears to have suffered a visible scratch under his right eye.

“We have taken the decision to not consider Raheem for the match against Montenegro on Thursday,” declared England boss Gareth Southgate in his punishment of Sterling.

“One of the great challenges and strengths for us is that we’ve been able to separate club rivalries from the national team. Unfortunately the emotions of yesterday’s game were still raw.

“My feeling is that the right thing for the team is the action we have taken.

“Now that the decision has been made with the agreement of the entire squad, it’s important that we support the players and focus on Thursday night.”

Liverpool captain Jordan Henderson set up a phone call where the two subsequently apologized to each other for the bust-up.

Gomez begged Southgate not to reprimand Sterling, but it was too little too late.

Wrote Sterling in an apology shared on social media after his dismissal:

“We are in a sport where emotions run high & I am man enough to admit when emotions got the better of me,” said Sterling. “Me & Joe Gomez are good we both understand it was a 5-10sec thing it’s done we move forward & not make this bigger than it is.”