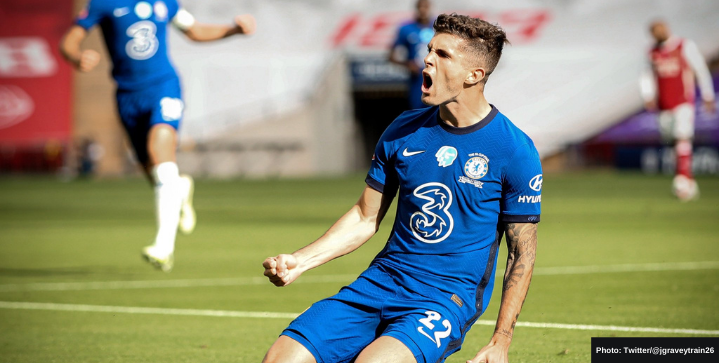 American sensation Christian Pulisic may be on his way out of Chelsea this summer after repeated snubs from new boss Thomas Tuchel.

Tuchel has admitted he’s been a ‘bit unfair’ to the winger, who was arguably one of Chelsea’s most exicting players last season.

“I can say nothing else but good things about him,” Tuchel said during his post-game press conference after The Blues 2-0 victory over Everton.

“Maybe his biggest problem is that I know him from Dortmund and I think he started only in the cup games.

“It is my responsibility and it is a bit unfair but I know what impact he can have in the last 20 or 30 minutes.”

Why Pulisic isn’t getting minutes

No one can fault Tuchel’s player selections thus far. He’s revived Havertz and Werner in the attack and conceded just two goals in 11 games thus far.

Said television pundit Paul Merson: “Chelsea have been outstanding. Whoever has played in midfield out of Matteo Kovacic, N’Golo Kante and Jorginho has been superb. Everyone who has played has been a nine out of 10 since Tuchel’s arrival.”

Tuchel has dropped Pulisic out of the starting line-up for Chelsea’s nine-game unbeaten run in the Premier League.

Pulisic also is coming off a series of injuries suffered under then boss Frank Lampard. It took the American all last season to convince Lampard of his pace and skill. The winger now has to prove himself once again under Tuchel and the coach’s new system.

Can Tuchel get the best out of Pulisic?

Tuchel appears to be playing it patiently with Pulisic, avoiding the rush of including injury recovering players in the starting squad so soon.

But the player may not be willing to wait it out on the bench for too much longer.

Pulisic must be eager to demonstrate his pace and skill in the attack, especially the manager who gave then 17-year-old Pulisic his first start while at Dortmund.

The £58million winger — awarded the number 10 this season — has only notched two goals and one assist in 25 matches played across all competitions this season. He’ll be itching to regain his post-COVID form.

The likes of Manchester United, Liverpool, and Bayern Munich are all keeping an eye on Pulisic’s future at Chelsea should the player want to jump ship prematurely. Starting at one of those clubs is no shoo-in either.

Chelsea fans will be hoping for Pulisic’s class to bounce back and play a bigger role in the coming weeks.