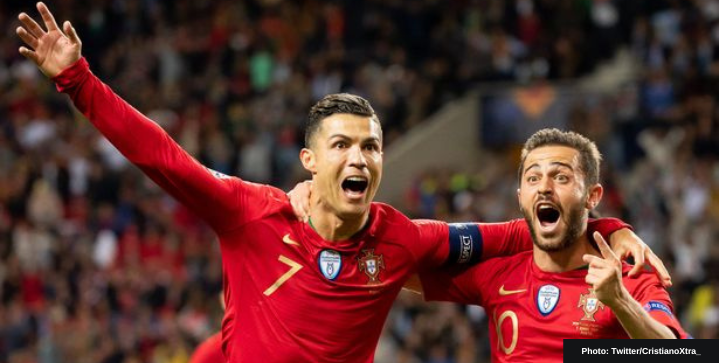 Portugal has been a powerhouse in European football for many years. Their national team has produced some of the best players in the world, and they have a rich history of advancing in major tournaments. Most recently, they won Euro 2016 and the inaugural 2019 Nations League, guided by no other than Cristiano Ronaldo.

Nuno Gomes appeared 79 times for Portugal, scoring 29 goals. He’s Portugal’s fifth all-time highest scorer. The striker enjoyed a successful career, winning the Primeira Liga twice with Benfica and the Coppa Italia with Fiorentina. He played one season in 2012 in the Premier League with Blackburn Rovers.

Gomes represented Portugal at the 2002 and 2006 World Cup tournaments and notched one World Cup goal in the third-place playoff loss to Germany.

Luis Figo is one of the most decorated Portuguese players of all time, having won the Ballon d’Or in 2000 and multiple La Liga titles as part of Barcelona and Real Madrid — he also won a Champions League title with the latter.

The playmaking winger appeared in 127 games for Portugal and scored 32 goals.

Often regarded as one of the best strikers of all time, Eusebio scored nine goals in the 1966 World Cup. That tally still makes Eusebio Portugal’s all-time top scorer at the World Cup. Four of those goals came in a comeback against North Korea in the quarterfinals; Portugal finished the tournament third that year.

The so-called “Black Panther” scored a whopping 733 goals in his career (638 with Benfica alone), an incredible record, winning the Ballon d’Or in 1965. The striker won 11 Primeira Liga titles with Benfica.

Striker Pauleta is the second-most goal scorer on Portugal’s national team, with 47 goals in 88 appearances. He represented his country in two World Cups and two European Championships. The goal-scoring machine scored a combined 141 goals and won 2 French Leagues during his time at Bordeaux and Paris St. Germain.

With infectious passion and lethal skill, Ronaldo is one of the greatest footballers ever to play the game. He’s also the most decorated, with 26 trophies, five Champions League titles, and five Ballon d’Or awards.

And while the World Cup trophy eludes him, he led his team as captain to Portugal’s first-ever major trophy in UEFA Euro 2016, followed by a Nations League triumph in 2019. He leads Portugal with 191 caps and 118 goals, the latter making him the top international goalscorer of all time. He became the first’s men’s player to score in five consecutive World Cups upon his goal in the opener against Ghana in Qatar.