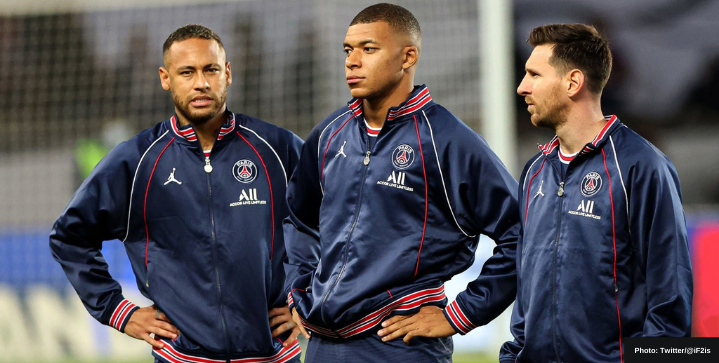 It’s not very often we see Lionel Messi get substituted. But PSG boss Mauricio Pochettino had other plans in yesterday’s clash against Lyon.

Pochettino took the superstar off with 15 minutes remaining to the match with the sides tied at 1-1. Cameras zoomed in on a frustrated Messi who refused to shake the hand of his fellow Argentine boss.

Messi nearly scored in the first half with a miraculous free-kick that nonetheless hit the woodwork. He also forced two saves from Lyon’s keeper Anthony Lopes.

PSG won the match on a decisive goal by substitute Mauro Icardi in stoppage time. Kylian Mbappe provided the match-winning assist. Meanwhile, Messi’s celebration from the bench looked muted having suffered the shock of substitution on his home debut.

PSG’s front-three of Mbappe, Messi, and Neymar are still working out how to gel within Poch’s system.

“I think everyone knows that we have a lot of very good players,” said Pochettino of the Messi sub after the game.

“Choices have to be made with the squad and during games with the best for the team and each player in mind. Some decisions are positive and others are not — we are there on the touchlines to make those decisions. Some are popular, others are not. I asked Leo how he was and he told me he was fine — no problem.”

Pochettino later revealed he also took Messi off because the player suffered a blow above his left knee. According to L’Equipe, the forward showed up limping in Monday’s practice and spent the session getting treatment.