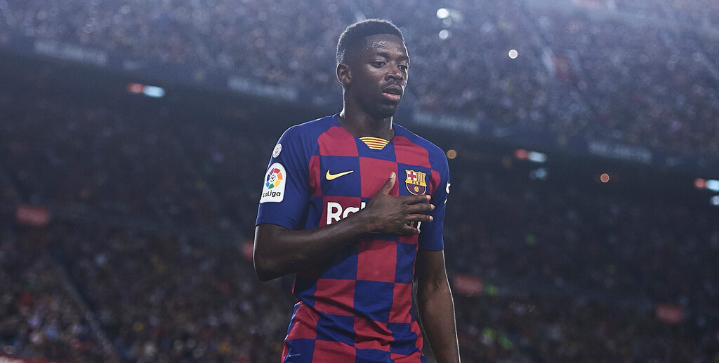 According to Eldesmarque, Barcelona winger Ousmane Dembele is on Manchester City’s wish list ahead of the January transfer window.

Dembele has seen his value drop precipitously from €140m to €70m due to a string of nagging injuries at Camp Nou. Barcelona boss Ernesto Valverde has already “lost patience” with the youngster after the striker hid an injury from Barcelona doctors earlier this year.

📸 — Ousmane Dembele is back in individual training, still recovering from his tear. pic.twitter.com/pNLJw0MZSp

The 22-year-old French winger has been out ten weeks treating a right thigh injury picked up against his former club Borussia Dortmund in the Champions League group stage.

The player, who’s only appeared five matches this season, traveled to Qatar to receive special treatment. But he returned to Barcelona earlier this week to join his teammates for El Clasico. He started individual rehabilitation at the team’s facilities yesterday.

Meanwhile, Dembele’s agent Moussa Sissoko, not to be confused with the Tottenham midfielder, set up talks with executives from Manchester City, PSG, and Chelsea. The Blues had their transfer ban lifted earlier this month.

The Citizens may be looking for a possible replacement for German winger Leroy Sane should he dart off for Bayern Munich over the summer. Sane has been out since August with a damaged ACL.

Guardiola would relish the opportunity to coach Dembele into one of the best wingers in world football, as the Spaniard’s done with Raheem Sterling. Even more, Dembele could replace the England winger should he refuse to extend his deal at City.

Arsenal have also shown interest in a potential loan move for Dembele, with new boss Mikel Arteta at the helm.

Come January or the summer transfer window, it appears that Dembele’s time at Barcelona is coming to an end. The pacy forward may soon be tearing it up in the Premier League.