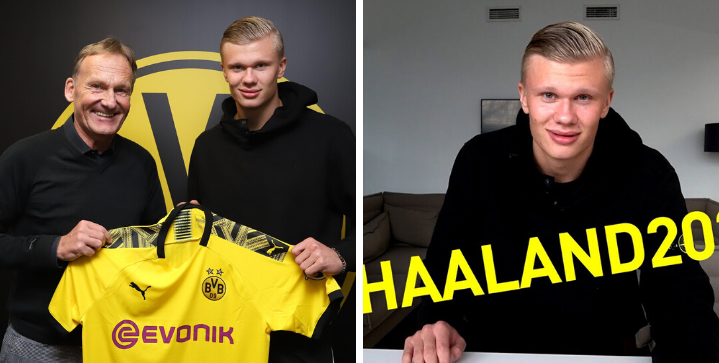 Borussia Dortmund have confirmed the signing of 19-year-old Erling Haaland from Austrian side RB Salzburg for $24 million on a deal lasting until 2024.

The announcement comes as a shock given the 6 foot 4 forward had strong links to Manchester United boss Ole Gunnar Solskjaer. Haaland played under Solskjaer at Norwegian side Molde back in 2017.

The Red Devils appeared to intensify their recruiting efforts for Haaland back in November, making him a priority signing for January. Haaland even teased the forthcoming announcement.

But after it was all said and done, the teenager, who’s already netted 28 goals this season, put to pen to paper with a club that’s developed the likes of elite forwards Robert Lewandowski and Pierre-Emerick Aubameyang.

Said Haaland’s agent Mino Raiola, “Man Utd had the most direct contact with him, but Haaland chose Dortmund.

“I’m very happy. He’s going to the club he wanted and that is best for him right now.

“If he wanted to go to Man Utd I would’ve been obliged to take him to there, but he didn’t.”

Raiola is expected to earn €15m in commission from the deal. A €10m signing-on fee goes to the player’s father, Alf-Inge Håland, and €20 million to RB Salzburg for the release clause.

With Haaland now off the table, Manchester United have turned their full focus on a potential £100m+ transfer for Dortmund starlet Jadon Sancho.