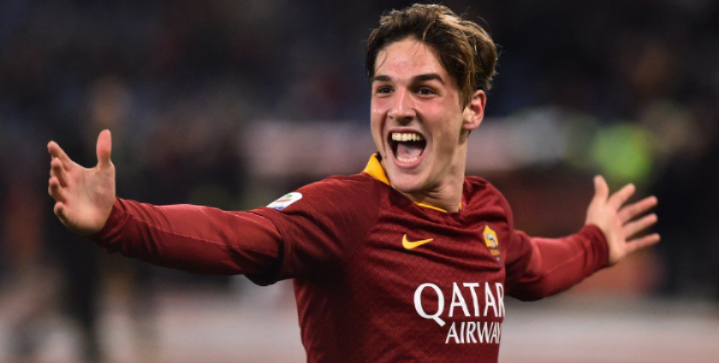 20-year-old wonderkid Nicolo Zaniolo has signed a new five-year contract with AS Roma.

The Italian midfielder enjoyed a breakout season last year, announcing himself on the world stage with a brace against Porto in the first leg of the Champions League Round of 16.

Zaniolo went on to score six goals in 36 appearances in his first season for the Giallorossi. The young Italian played one year for Inter Milan youth side before making the jump to Roma.

“A year ago it was an easy decision to choose Roma, and today it is even easier – after a season that helped me fall in love with this team and this city,” said Zaniolo. “I would like to thank the club for giving me the opportunity to tie myself even closer to these colors – it is exactly what I wanted.”

Ice in his veins ❄️

Throwback to when Nicolo Zaniolo sat a whole defence down to score his first Serie A goal… 😎
#ASRoma #Zaniolo2024
pic.twitter.com/oFEhhAjZS6

Chief executive Guido Fienga is satisfied to have landed a long-term deal on one of the best young talents in European football. Zaniolo was strongly linked with Tottenham this summer.

“This decision underlines the conviction, shared by both the player and the club, that Roma is where Nicolo can realize the vast potential that so excited the fans last season,” said Fienga.

“We are certain that he will play a huge role for this team in the future.”