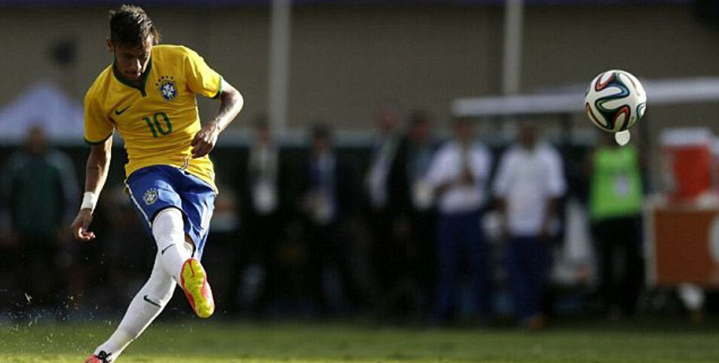 Like his former teammate Lionel Messi, the 26-year-old Paris Saint-Germain forward Neymar is also a free-kick specialist. With high-accuracy in set pieces, these are eleven of our favorite of the Brazilian’s free-kickers to date.

In a 2018 Champions League match against Red Star Belgrade, Neymar placed a 30-yard dead-ball up and over the Red Star Belgrade wall. Neymar finished the game with a hat-trick in a 6-1 victory.

With a free-kick just outside the penalty arc, Neymar duped the Anderlecht defense into thinking he was going to smash the ball over the wall. Instead, he swiftly passed it into the bottom left-hand corner of the net. Less power, more placement.

In a 2015 La Liga match against Sevilla, Neymar worked covertly with Lionel Messi to freeze the goalie just before blasting the ball into the left corner of the net. The strike was one of Neymar’s 68 goals in 123 domestic appearances with the club.

With his unbeatable right foot, Neymar sent this equalizer into the top left shelf and gave the goalie no chance but to dive and claw the air.

Whipping and curling the ball over the wall, Neymar scored a world-class free-kick against Celtic in the 2016/17 Champions League. The Blaugrana went on to win 7-0.

In a La Liga match against Sporting Gijon, the dead-ball specialist whipped a belter around the wall and into the back of the net. The goalie got a hand on it too little, too late. Barcelona won the game 6-1.

Down 4-0 in aggregate goals against Paris St. Germain, the second leg went back to Barcelona where a comeback seemed impossible. But after Luis Suarez and Messi stepped up, it was Neymar’s turn. His 88th-minute free-kick goal from the corner of the 18-yard box was a thing of beauty. Barcelona went on to win before bowing out of the tournament against Juventus.

In a vital free-kick against the Germany side in the gold medal game in the 2016 Olympics, Neymar thumped the ball from about 35 yards out toward the left corner of the goal. The ball smacked the top post before ricocheting down and in.

In a 2013 Confederations Cup match against Italy, Neymar sent home a free-kick just outside the 18-yard box. Even the legendary keeper Gianluigi Buffon couldn’t get a finger on it.

In a 2012 match against Belarus, a 20-year old Neymar sent an absolute curler from 35 yards out to put the ball into the left side of the net. The speed of the kick left the goalie no chance but to grab for air.

At home and in front of thousands of Brazilian fans, Neymar scored a 35-yard free-kick torpedo that breaks through the wall, curls, and dips into the back of the net. Cha-ching.

11 of the most capped Mexico players