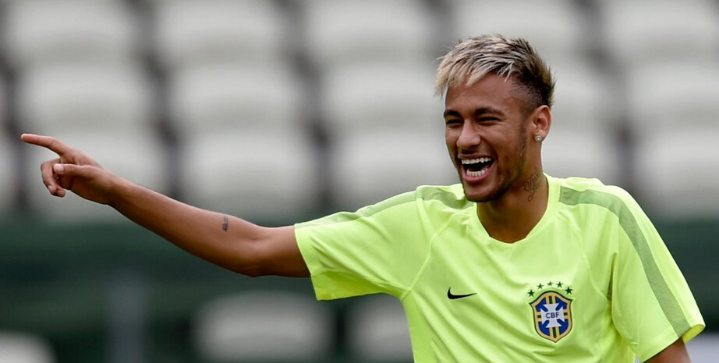 The king of haircuts, Neymar sported three different styles at the 2018 World Cup. Here’s a list of some of our favorite Neymar hairstyles to date.

Neymar’s most popular haircut is the Mohawk. With disheveled high hair and short shaved sides, the style just seems to fit his haphazard style of play.

Back when he was a little bolder in his haircut styles, Neymar donned the mohawk with Roberto Baggio-like ponytail braids.

At one point in his Barcelona career, Neymar felt like keeping it simple. Hence, the clean-cut head shave.

Neymar likes to sport the bleached blonde when he plays for his national side. He spices it up by adding long bangs that peek out over his forehead. Another trademark style.

The one he wore in 2014 had the sides shaved with a blonde faux hawk up top. Be sure to ask your barber for this Neymar look.

It’s more common to see Neymar wearing the gelled curly haircut with blonde streaks than his natural hair color. He flashed this hairdo at the 2018 World Cup.

Who needs a Mohawk standing all the way up? Neymar often sported the flat mohawk during his time with Santos and Barcelona.

Mullet with bangs and headband

Get some gel, a headband, a mullet, and grow some tails if you want to copy this one from Neymar. But we have a feeling he may be the only one that can pull it off.

While he may not have ever sported this style on the field, it still counts if it’s in the barbershop. With a slick shave and braids tied to the back of a ponytail, this style looks like he’s headed for a Calvin Klein photoshoot.

With short sides and a spaghetti-styled top, Neymar made this one of his three looks at the 2018 World Cup. Hungry, anyone?

For one of his three haircuts sported in the 2018 World Cup, Neymar opted for the blonde-feathered look, mixing short sides in with that salty surf hair gelled forward.

Neymar added another haircut to his long line of interesting hairstyles when he debuted a platinum blonde cut with the silhouette of the Batman logo while on international duty. The superhero-inspired hairdo apparently has something to do with the PUMA x Batman collaboration that’s on the way.

The Batman aficionado released his own series of comic books back in 2018.