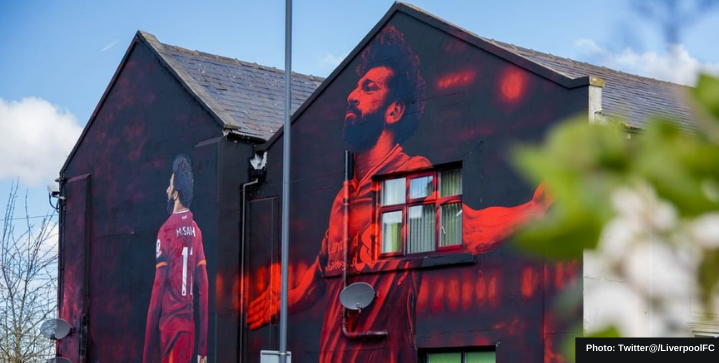 Mo Salah got an official mural treatment in Liverpool. British artist John Culshaw immortalized the Egyptian King in a painting near Anfield stadium.

One of the designs mimics Salah’s iconic moment against Everton earlier this season when fans threw a flare onto the pitch after the player scored in a 4-1 victory over the Merseyside rivals at Goodison Park.

The other side of the building shows Salah’s iconic celebration during the 2-1 victory at Manchester City in the 2018 Champions League.

Where to find the design?

Fans can see the stunning painting on Anfield Road right across from The King Harry Bar.

The mural follows in the footsteps of other landmarks depicting Liverpool players Trent-Alexander Arnold and Liverpool captain Jordan Henderson, both completed by different artists.

Salah also has a mural dedicated to him in New York’s Times Square.

Will the Egyptian superstar extend his contract at Liverpool?

Salah’s future remains in doubt after he rejected a recent contract extension at Liverpool, demanding a higher salary. He’s currently linked with a move to Barcelona.

However, the Liverpool faithful remains hopeful that the club and player will find a solution. Salah is the Reds’ 9th all-time leading goalscorer with 153 strikes in 239 appearances.

The 29-year-old sits just five goals behind Michael Owen and leads the race for the PL Golden Boot this season with 20 goals.