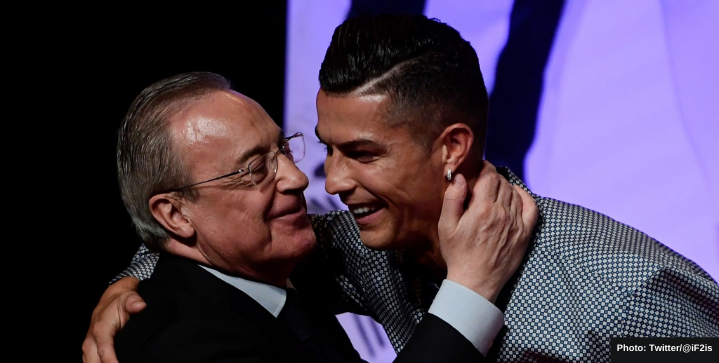 “He is crazy. This guy is a fool, a sick man. You think this guy is normal, but he’s not, or he wouldn’t do all the things he does,” said Perez on Ronaldo back in 2012.

Ronaldo joined Real Madrid in 2009 in an £80million deal, making him the world’s most expensive transfer at the time.

The Portuguese legend scored 450 goals in 438 appearances for Los Blancos, averaging over a goal per game. The four-time Ballon d’Or winner — which he earned in the iconic white shirt— helped the club win four Champions League trophies and two La Liga titles.

“These are guys with a terrible ego, both spoiled, the coach and him, and they don’t see reality,” the audio reveals the president saying.

“Mourinho is an idiot. It is not that he does not want to play. Well, he’s a bit abnormal. He drives without a license. That said, he has been overwhelmed by the pressure.”

Mourinho led Real Madrid to one La Liga, a Copa Del Rey, and a Spanish Super Cup during his three years at the club.

Perez defended the revelations aired by El Confidencial, saying that “single phrases of conversations taken from the broad context in which they occur.”

“For them to be reproduced now, after so many years have passed since those conversations took place, is I understand due to my participation as one of the promoters of the Super League.

“I have put the matter in the hands of my lawyers, who are studying the possible actions to take.”

Now all we can do is wait until the next tape drops.