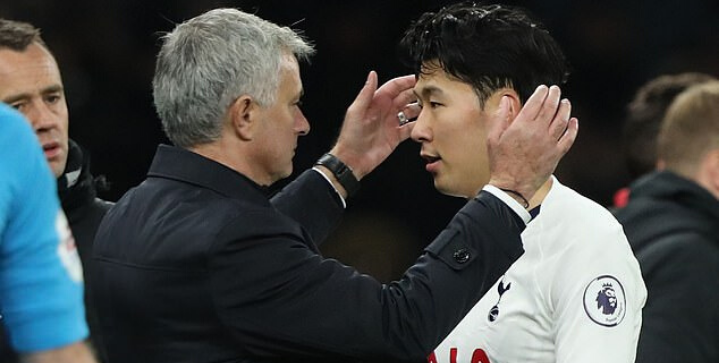 The South Korean international was named AFC Asian International Player of the Year for the third time – he won in 2017 and 2015.

Son is enjoying another stellar season, notching nine goals and eight assists in 18 games across all competitions.

“I want to congratulate Son for Asian Player of the Year. I am here for ten, twelves days…I am already in love with this guy,” said Mourinho.

“Fantastic player, fantastic boy. Everybody in the club is so so happy with him,” the Portuguese boss added.

Son scored the last goal under the beloved coach Mauricio Pochettino before the Argentine got axed. The 27-year-old also scored Tottenham’s first goal to kick-off the Mourinho era.

Son is sanguine about his new boss.

“He’s very kind. He’s smiling, making jokes with the players. I like it, of course. I think the results changed a lot, the positive vibe,” said Son in an interview with FourFourTwo.

“Everyone is positive before games. The gaffer is doing a great job and we are really happy with him. The atmosphere changed a lot with the positive vibes.”

Mourinho is undefeated in his first three matches with two wins in the Premier League and one against Olympiakos in the Champions League group stages.

Watch the match on Wednesday, 2:30 PM on NBCSN or Fubo.