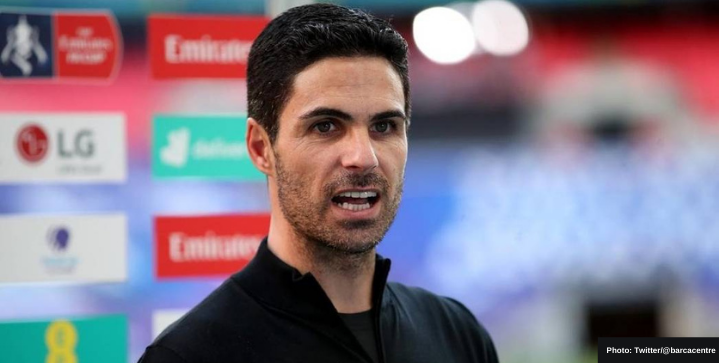 Arsenal manager Mikel Arteta says he is “extremely happy” at the Emirates after being linked with Barcelona.

According to radio station RAC1 in Spain, Barcelona presidential candidate Joan Laporta is keen on making Arteta the boss should Ronald Koeman exit at the end of the season.

“Arteta? I won’t talk about names, Koeman will be the coach when I become president,” said Laporta. “He is a great former Barcelona player who deserves to be respected and has a margin like all coaches based on results and performance. I will not destabilize the team.”

Laporta also reassured Barcelona fans in retaining Lionel Messi: “I am sure that if someone else wins the election (other than me), Messi won’t stay at the club.”

“I’m fully focused on the job I have to do here and we have a lot to do. I’m really enjoying it,” Arteta said ahead of Arsenal’s match against Burnley this weekend.

The Spaniard also mentioned that he and Arsenal have not started contract negotiations for next season.

Arteta is only in his second season with the Gunners, having won the FA Cup last year. Currently 10th in the Premier League table and out of both domestic trophies, however, means the Europa League represents Arsenal’s best chance to win a trophy this season.

Barca legend Xavi, who is currently the coach of Qatar side Al Sadd, also remains tipped for the managerial position at Camp Nou as boss. The 40-year-old denied the Blaugrana’s request to take over for Ernesto Valverde last season.

Should Koeman not stay on next season, who would you like to see as Barcelona’s next boss?