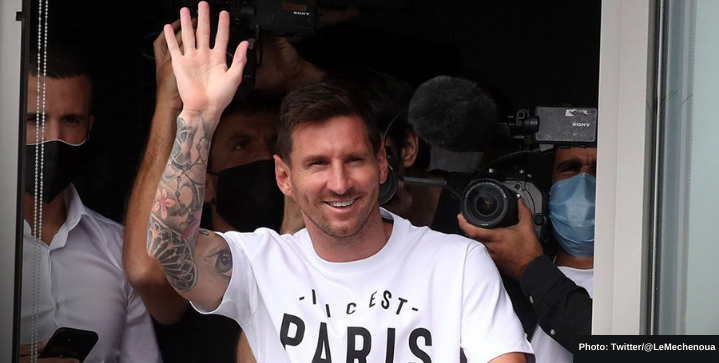 The Argentine has signed a two-year deal with Paris-Saint Germain with an option for a third year. The six-time Ballon d’Or winner expects to earn £53m per year, plus bonuses — that’s just over £1m a week.

Messi leaves his career-long club, Barcelona, where he made 778 appearances, scored 672 goals, and won 35 trophies — after failing to negotiate a new deal.

New La Liga financial fair plays would not permit Messi to extend his 21-year-career at Camp Nou, even if the 34-year-old decided to play for free.

Messi’s departure from Barcelona could cost the club a whopping €137 million in brand value, €17M loss on match days, €43M on merchandise, and €77 in business revenue.

Messi will play under sacked Spurs boss Mauricio Pochettino who now manages a team with a daunting front three of Messi, Neymar, and Mbappe with supporting superstars Verrati, Hakimi, Ramos, Marquinhos, and Donnarumma.

Paris’s new royalty will also wear the #30, even though that number is typically reserved for goalies in Ligue 1.

After undergoing medicals today, Messi will be confirmed an official press conference tomorrow, 11:00 am Paris time.

Buckle up. This is going to be quite a ride.