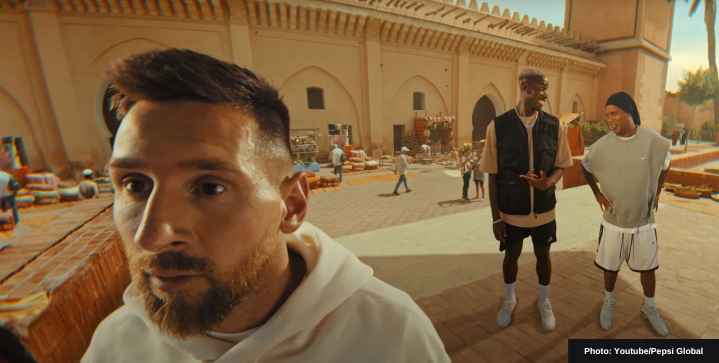 Lionel Messi, Paul Pogba, and Brazilian footballing legend Ronaldinho pair up in the latest Pepsi commercial ahead of the World Cup. And it might be the best commercial you’ve ever watched.

One of the world’s largest beverage companies may not be the primary sponsor at World Cup Qatar, that’s reserved for Coca-Cola, but they’re doing their best to steal the show.

Pepsi brought together an incredible cast of characters to support its latest advert for the ‘Thirsty For More’ campaign.

The trailer begins with the GOAT Messi getting nutmegged before the star trio of Messi, Pogba, and Ronaldinho go on a redemptive nutmegging spree through the locals.

Social media football influencers ‘Receba’ Ferreira and Kaljit Atwal appear in the video alongside footballer insider Fabrizio Romano who spreads the word about the footy street challenge. All the while, Fatboy Slim’s 1998 hit “The Rockafeller Skank” plays in the background.

The video’s old-school vibes give World Cup fans instant memories of Pepsi and Nike’s fun and stylistic adverts back in the day.

Pepsi filmed the commercial in Morocco’s Marrakech this past summer, not exactly a stone’s throw from Qatar but it gives the city of an Arabian city. World Cup 2022 kicks off on November 20 in Qatar.

What are your thoughts on Pepsi’s latest eye-catching World Cup commercial?