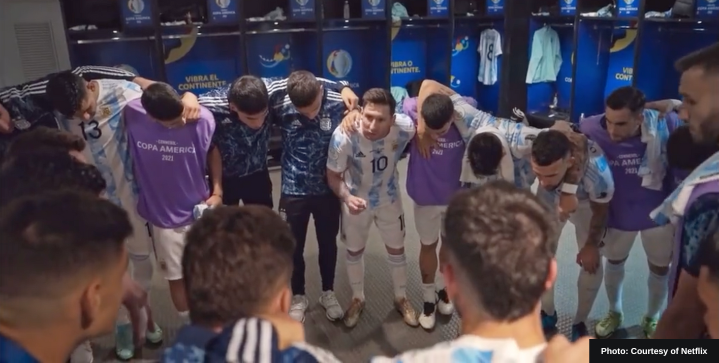 The documentary follows the Argentinian national team’s journey through the team’s Copa America triumph in 2021.

The Albicleste defeated Brazil 1-nil in the final at the El Maracana, giving Argentina its first major title in 28 years.

The trailer reveals some dramatic scenes, including Lionel Messi’s pre-game speech before the final. One of the greatest ever number 10s won his record-setting seventh Ballon d’Or that same year — in these custom boots, no less.

Is Messi a true leader?

“Before the start of each game, he (Messi) spoke. But his last speech was different, he lost his mind,” said winger Angel Di Maria, who went on to score the decisive goal.

“I have many trophies, but this was the one I wanted the most,” emphasized Di Maria.

For all those who thought Lionel Messi was a passive frontman, let the video show proof of the contrary.

Said Messi before the final, “There is no such coincidence like this. This cup had to be played in Argentina. And God brought here. He brought it here to lift up at Maracana, to make it more beautiful for everyone. let’s go out confident and calm and we’ll take this one home…”

The rest is history.

Argentina is the hottest ticket of the tournament and, according to an AI supercomputer, is predicted to win the whole thing. It would be Argentina’s first World Cup trophy since 1986 and surely increase Messi’s chances of winning a record-setting 8th Ballon d’Or.