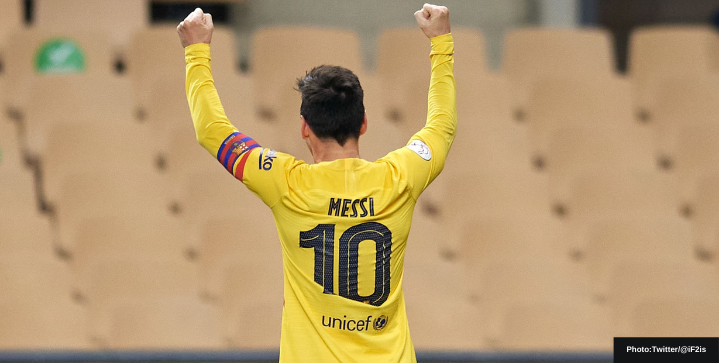 Lionel Messi has declared his intention to stay in Barcelona, according to TVE.

The Argentine superstar is coming to the end of his current contract and remains linked with a move away from Camp Nou. Both PSG and Manchester City are regarded as favorites to sign the player.

But the 33-year-old has now declared his intention to stay with the Catalan club as long as the side remains competitive. Messi’s father Jorge has met with Laporta to start talking about signing a new deal at the end of the season.

What is Messi’s future?

Reports indicate that Barca is working on a three-year contract to offer to Lionel Messi to persuade him to stay in Barcelona. Due to the financial troubles caused by COVID-19, Barcelona can longer afford to pay Messi his €75 million net annually but are working on other ways to match the amount.

“Messi is a one-club player, deeply rooted at Barça,” said Joan Laporta. “I’m convinced that he wants to stay and we’ll do everything we can to keep him.”

Few players in the history of the game have won as many trophies as Messi (36). The six-time Ballon D’or winner is widely regarded as the greatest player of all time. His attacking style of play, combined with his ability to read the game, has made him a nightmare for defenders. His ability to score from anywhere on the pitch, his exceptional dribbling skills, and his killer passes make him an artist on the pitch.

“I can’t imagine Messi away from Barcelona. As a fan of the club, as a friend of his, I would tell him not to leave,” said former teammate Luis Suarez.

Even Manchester City boss Pep Guardiola would prefer that Messi stay home for the sake of the club: “I hope Leo ends his career at Barcelona because he won’t find a better club. What must be done as Cruyff once said, is to return to your roots that made Barca a special club.”

If Messi decides to stay in Barcelona, the Blaugrana will relish the opportunity to become a dominant force in European football once again.