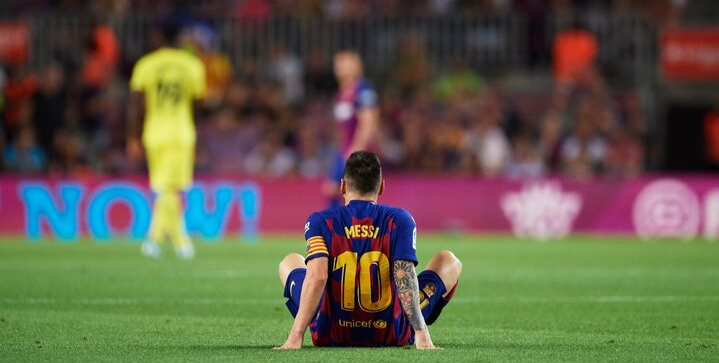 Lionel Messi left the field at halftime in Barcelona’s 2-1 victory against Villarreal with an apparent groin injury.

It was the 32-year-old’s first start since picking up a calf-strain in pre-season.

Ousmane Dembele came in for the Argentine to start the second half with the Blaugrana ahead 2-1.

An unfortunate turnaround for Messi

“I have been out of action for two months and I notice this,” he said after winning Best FIFA Men’s Player of the Year Award for a record-setting sixth time. “I feel fatigued and heavy, lacking rhythm,” he told Marca.

The first appearance of the Messi-Suarez-Griezmann frontline looked promising. Messi set up Griezmann’s header off a corner kick in the sixth minute before Arthur dropped a long-range strike in the 15th minute to help secure the home victory.

But less than 24 hours after the awards ceremony, the star man found himself on the unlucky side of his 400th La Liga start.

“Messi is suffering a small pain in the adductor muscle and we didn’t want to take risks,” said Valverde in a post-game press conference.

Messi will most likely miss Saturday’s match against Getafe due to injury. He may also miss out on Barcelona’s second group stage Champions League match against Inter Milan next week.