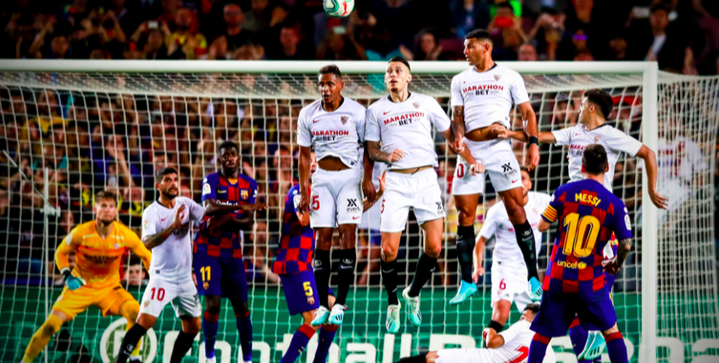 In just his second start of the season since suffering a foot injury earlier this summer, Lionel Messi nailed his 100th goal from outside the area for Barcelona in a 4-0 win over Sevilla.

The strike came in the 78th minute, a stunning free-kick that curled over the wall and landed in the top right corner. Nearly half of Messi’s century mark of outside-the-box goals have come from direct free-kicks.

With 420 La Liga goals, Messi is now one strike ahead of Cristiano Ronaldo, who’s scored 419 goals across Europe’s top leagues.

On top of Messi’s 37th strike against Sevilla across all competition, he also became the first La Liga player this century to score in 16 consecutive seasons.

Is Messi just getting started?

After dishing a dazzling assist to Luis Suarez in Barcelona’s comeback victory against Inter Milan last week, Messi’s first goal of the season may be a sign of things to come.

As he said after the group stage Champions League match: “I am still getting started. This the first time that I have completed 90 minutes. As the season goes on I will gradually let loose.”

Even when the little magician feels 100 percent, he’ll need help from his Barca teammates as the Liverpool match epitomized last season.

Luckily, Messi’s striker partner Luis Suarez is in excellent form. Suarez has netted in the last three straight games, with one golazo after another.

Man United back Solskjaer despite worst league start in 30 years

Dani Ceballos drops a hint about his Arsenal future