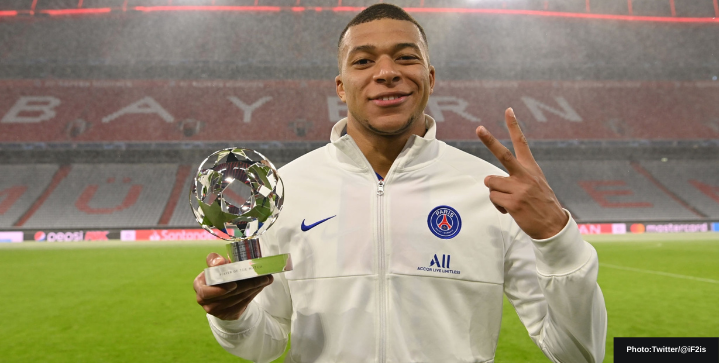 After tearing apart Bayern last night with a brace of wonderful finishes, Kylian Mbappe has once again been linked with a move to Real Madrid.

El Chiringuito reports that the 22-year-old will most certainly play for Los Blancos next season.

Of course, this isn’t the first time Mbappe and Real Madrid rumors have circulated. Madrid boss Zinedine Zidane is obsessed with the young striker, revealing his “love” of Mbappe late last year.

PSG recently placed a €120 – €150 million transfer fee on their star man should he leave this summer.

Kylian Mbappe is the future and the present

Mbappe produced yet another star performance against Bayern Munich in the Champions League last night.

After he finished off a Neymar-led counter in the second minute of the match, Mbappe punished Bayern with a conclusive second to make it 3-2.

Statisticians at Sky Italia reported that the Frenchman took 11 steps in 1.82 to score his second and PSG’s third goal. That’s some quick feet.

With the strike, he also overtook Thierry Henry’s tally for UCL knock-out stage goals with 13 goals. He also became the first player to score a total of five away goals in the round of 16 and quarter-finals in the same season.

The 22-year-old World Cup winner is clearly one of the world’s best footballers, following in the footsteps of serial winners Messi and Ronaldo.

Mbappe also shares an elite mentality, saying recently that “every time I step onto the pitch, I tell myself I’m the best. And yet I’ve played on the same pitch as Messi and Cristiano. And they’re better players than me!”

Wherever Mbappe goes next, expect greatness to continue.

"My teammates were so good. And I want to congratulate the whole team."