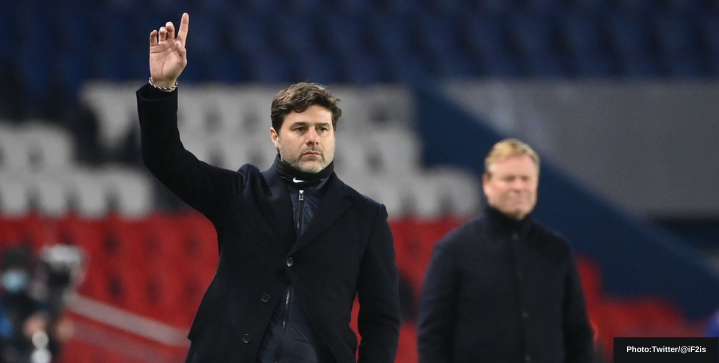 This past weekend, the Red Devils sacked Ole Gunnar Solskjaer after a 4-1 loss to Watford. United were giving Solksjaer the chance to see out the season and planned to replace the Norwegian in the summer with Pochettino already standing at the top of United’s list.

It turns out that the 49-year-old Pochettino prefers to take the United job now rather than wait for the summer. Sir Alex Ferguson is helping Manchester United lead the charge to sign the Argentine.

Reports indicate that United will have to pay a £10million transfer fee to get Pochettino, half the amount if they wait until the summer.

Pochettino coached Premier League side Tottenham for five seasons, taking Spurs to the Champions League finalist in 2019. He’s only been in his managerial role at PSG for four months. Coincidentally, Poch beat Mourinho’s Red Devils side 3-0 upon his last visit to Old Trafford.

With Pochettino potentially headed to Old Trafford, Zinedine Zidane — who’s ‘not interested’ in the United gig — could be ready to fill the managerial vacancy in Paris.

The Frenchman was said to be waiting to take over Les Bleus after next year’s World Cup.

Leceister’s Brendan Rogers and Ajax’s Erik ten Hag are also on the short-list of candidates to take over at the Theater of Dreams.

In the meantime, Michael Carrick plans to serve as interim boss for United’s Champions League clash against Villarreal tomorrow.

“I’m prepared to do it for however long it takes – whether it’s one game, two games, right now I’m not sure but I’m not thinking about that, it’s about tomorrow,” said Carrick.