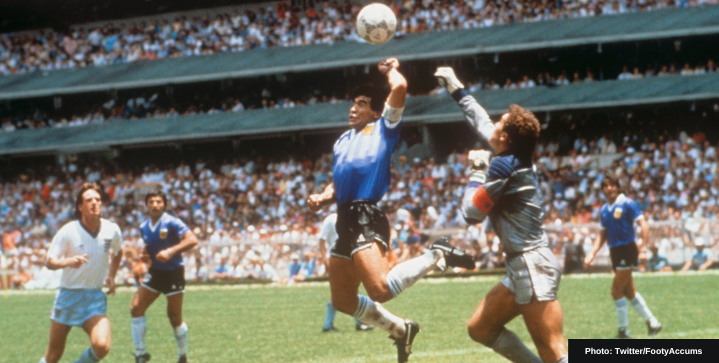 The ball Diego Maradona used to score the “Hand of God Goal” and “Goal of the Century” is set to go for auction in London on November 16.

The ball’s current owner, the Tunisian referee Ali Bin Nasser who reffed the famous 1986 World Cup quarter-final between England and Argentina, said: “This ball is part of the history of football, it seems right to share it with the world.” He’s demanding between the region of $3.4 million for it.

Maradona scored the infamous “Hand of God” goal six minutes into the second half when the forward “headed” in a cross. Bin Nasser let the goal stand, which Maradona recounted was a “little with the head of Maradona and a little with the hand of God.” The sneaky goal gave Argentina a crucial one-nil lead.

One of football’s greatest ever number 10s scored the “Goal of the Century” four minutes later when he out-dribbled five England players from his half of the field to score. The match ended 2-1, with the Adidas Azteca ball making it through the full 90 minutes.

2022 is the year for Maradona memorabilia

Maradona memorabilia is all the rage this year.

The ball, which is to be auctioned off by Graham Budd Auctions on October 28th, follows the sale of Maradona’s game-worn jersey from the exact match.

That shirt sold for $9.3 million last May, making it the most expensive game-worn shirt for four months before Michael Jordan’s 1998 NBA Finals went for $10.1 million.

And now, for an excuse to watch Maradona’s two historic goals again.