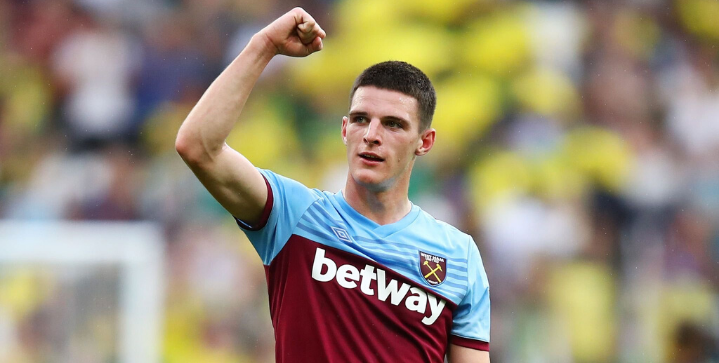 While initially planned as a summer transfer target, the Red Devils have expedited their urgency in signing the 21-year-old England international.

“He might need another season or two under his belt before making a move like there, where suddenly the pressure does become a lot more,” Ashton added.

“I certainly wouldn’t be in any rush if I was Declan Rice. I think he’s in the right place to keep progressing his career.”

Should Manchester United break the bank for Declan Rice?

Rice has played with the Hammers first team since the 2016/17 season and appeared in every minute in the Premier League this year. His masterclass performances have made him the new hero for the East London side.

But Rice is part of Solksjaer’s immediate plans to fill the club with emerging England internationals — United signed Aaron Wan Bisaaka and Harry Maguire this past summer. At £100 million, Rice would become the most expensive transfer in the history of Manchester United.

Some Red Devils fans are having their doubts over the priority of signing Rice though. 22-year-old Scottish international Scott McTominay continues to excel in the defensive midfielder role. His leadership on the field could make him a future club captain.

Perhaps Solksjaer envisions playing two anchormen of McTominay and Rice to buttress a midfield orchestrated by Paul Pogba. Whatever the boss’s transfer plans may be — United have also been linked to Jadon Sancho and Thomas Mueller as well — Solksjaer’s future is now as his job hangs a thread.