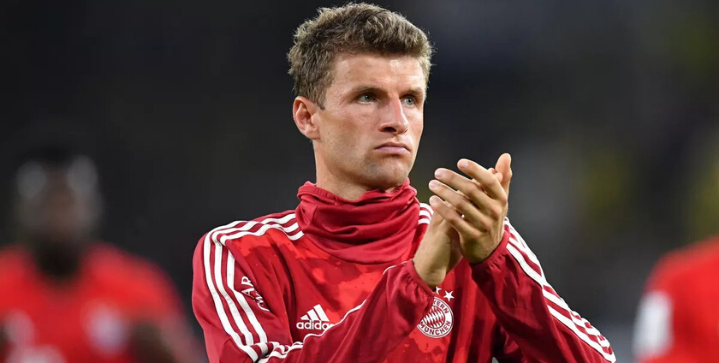 According to Sport Bild, Manchester United and Inter are both interested in signing Thomas Muller from Bayern Munich in January.

The 30-year-old forward and attacking midfielder has seen his stock dip on the Bavarian side this season — coach Niko Kovac even referred to Mueller as a “backup option.”

Club president Uli Hoeness also cautioned Mueller about his playing time when Bayern signed Coutinho on loan. “It was obvious that if [Coutinho] comes things would be difficult for Müller,” said Hoeness.

Mueller, however, started against Olympiacos in Bayern’s 3-2 Champions League win at Karaiskakis Stadium on Tuesday night. He assisted twice.

“I’m trying to concentrate on playing football,” said Mueller. “The whole discussions can perhaps slowly come to an end a bit.”

Not the first time the Red Devils have wanted Mueller

Manchester attempted to sign Mueller back in 2015 for €100m in 2015 but Bayern rejected the offer.

A 6-month loan with an option to buy this time around for Muller wouldn’t be a bad deal for the German looking for a more consistent starting role. Muller’s contract with the Bavarian giants expires in 2021.

The Red Devils are trying to fill the void of attackers lost with the departures of Romelu Lukaku and Alexis Sanchez, both to Inter Milan. Interestingly, Internazionale will challenge Manchester United for both Mueller and Mario Mandzukić in the January transfer window as well.

As speculation mounts over Mueller’s availability next year, we’ll leave you with this.