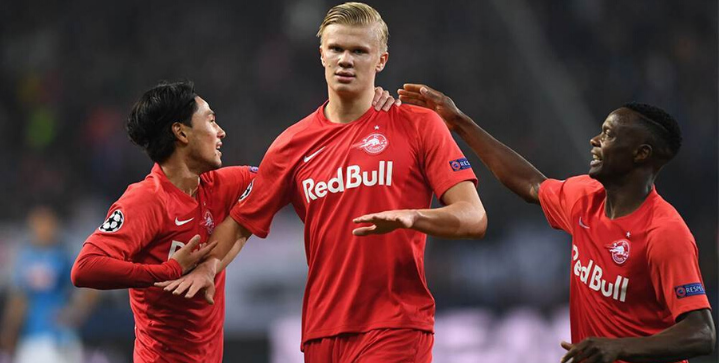 Haaland is on an absolute tear for Austrian Bundesliga side RB Salzburg. He has scored a whopping 26 goals in 18 games across all competitions this season (7 strikes in Champions League alone), including 5 hat-tricks.

It’s no wonder that clubs from Real Madrid, Barcelona, Bayern Munich, Napoli, Juventus, and Manchester United are interested in recruiting the talents of the 6 foot 4 Norwegian.

But it is the Red Devils that may have the best chance of wooing the teenage star to Old Trafford.

Manchester United have reportedly picked up their efforts to sign Haaland, sending their ‘most trusted scout‘ Simon Wells to monitor the striker. Manchester United boss Ole Gunnar Solskjaer hopes his previous relationship with Haaland puts United at the forefront of the teen’s next destination. Solksjaer signed Håland for Molde in 2017 for £180,000.

According to ESPN, the price tag for Haaland could be as high as €100 million. The wonderkid’s contract with FC Salzburg expires in 2023 — it doesn’t include a release clause.

United could loan Haaland back to RB Salzburg once the deal is completed to continue building up his experience. He has a long way to go to get on the same level as a

According to the Mirror, Manchester United are also looking ot bolster their attacking options with the signing 19-year old starlet Jadon Sancho.

The addition of both Haaland and Sancho to the likes of Marcus Rashford and Anthony Martial could make United serious challengers for the Premier League next season.