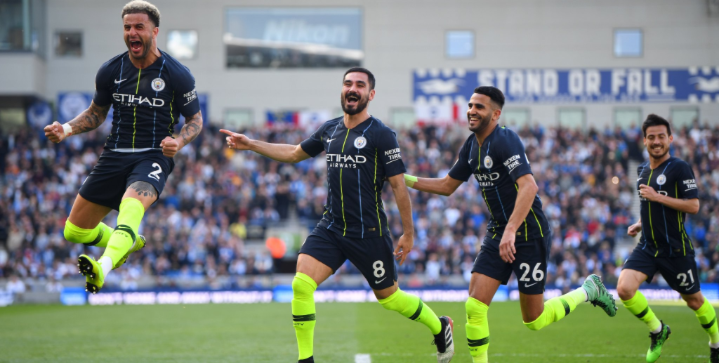 Manchester City won their fourth Premier League title yesterday in a 4-1 away victory over Brighton.

The Citizens went on an astonishing 14-game win streak to finish one point above Liverpool in one of the tightest Premier League races in recent history.

After falling behind one-nil in the 27th minute, the Citizens quickly turned into its traditional offensive juggernaut to force a goal 83 seconds later. Center back Aymeric Laporte scored a second ten minutes after that with Riyad Mahrez and İlkay Gündoğan securing the title in the second half with glorious strikes.

A BEAUTY from İlkay Gündoğan!

The league title elevates Pep Guardiola to an elite club, joining Sir Alex Ferguson and Jose Mourinho as the only Premier Leauge managers to win back-to-back titles. With 26 trophies, Guardiola also breaks the tie with Mourinho on the most silverware among active managers.

Manchester City have now won the Premier League trophy four times in 8 years with the Belgian Vincent Kompany serving as captain for each of those title runs. John Terry still holds the record with five.

“It was the hardest and most satisfying Premier League title win ever,” said Company. “Liverpool were exceptional this year and I don’t mean to rub it in, it is what it is, they didn’t deserve to be second this year.

“But it only makes me that much more happy that we’ve been up against such a good team and when our backs were against the wall we kept finding the results.

We won at the Etihad against Liverpool and I think that made the difference and once we got our noses in front, we were able to stay in front. I’m so happy for myself, the team and our fans.”

With such a titanic title race coming to an end, one can only itch with excitement for next season to start.