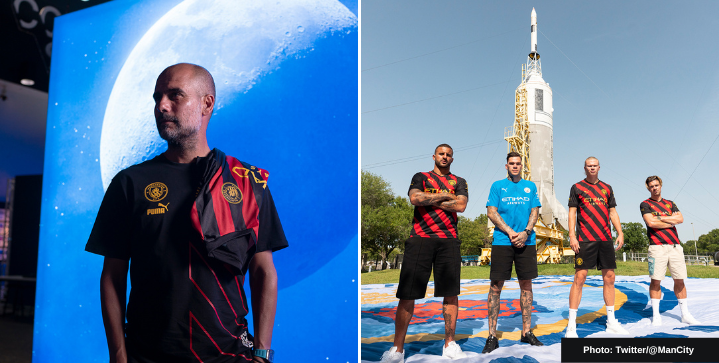 Manchester City have released their new away kit for the upcoming season.

The black and red striped shirt is a throwback to the sides that won the 1969 FA Cup Final, the 1970 League Cup, and the European Cup Winner’s Cup Finals. There is one noticeable difference, however.

The new Puma jersey features “incomplete” stripes that run diagonally rather than vertically aligned. The design also stops at the sleeves.

The nostalgic color combination contrasts the predominant sky blue associated with the club, although the team wore vertical red and black stripes during the 2011-12 season.

Writes City on the official release of their kit: “Conceived by the legendary Malcolm Allison, the kit featured red and black vertical stripes that proved triumphant at the 1969 FA Cup Final, and the 1970 League Cup and European Cup Winners’ Cup Final, earning their place among the fans all-time favorites.”

Ready for blast off

Man City launched the kit in another historical fashion by visiting NASA’s Space Center in Houston, where the team is currently on a pre-season tour.

Meanwhile, boss Pep Guardiola stood atop one of the model spaceships.