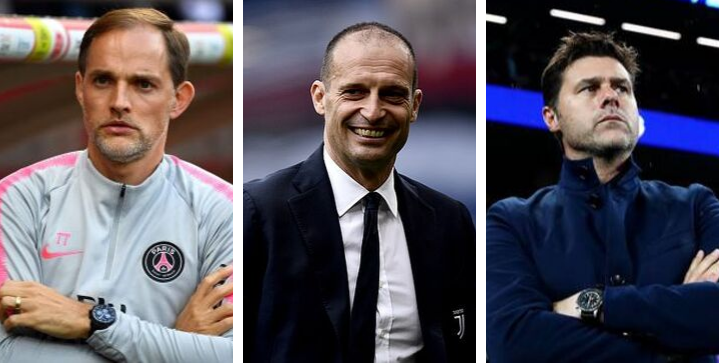 Ole Gunnar Solskjaer’s side failed to register a single shot on target yesterday’s match against AZ Alkmaar in the Europa League. It was the first time the Red Devils have ever failed to do so in the competition’s history.

With zero wins in the last 10 consecutive away fixtures, this is United’s worst away run since 1989. All the magic since that Champions League night in Paris last season has all but dissipated.

Quipped United’s previous boss Jose Mourinho back in May: “I don’t want to be the nice guy, because the nice guy, after three months, is a puppet and that doesn’t end well.”

Here are Manchester United’s coaching candidates should Ed Woodward give Solskjaer the sack.

According to The Guardian, the former Juventus boss Massimiliano Allegri is already learning English to prepare for a potential move to England. The 52-year-old Italian coached the Turin side to five Serie A titles, four Italian Cups, and two Champions League finals where his team finished as runner-ups.

Allegri is still open to a move to Old Trafford even if the team fails to qualify for Champions League. But he refuses to take any new job until his one-year sabbatical ends.

PSG coach Thomas Tuchel is also on the shortlist of potential Manchester United coaches. The 46-year-old German is in his second year in Paris with his team in good form.

However, his departure rests on his success in this year’s Champions League. Solskjaer’s side defeated Tuchel’s PSG in last season’s first knockout round.

Tuchel’s attacking style football and careful management of youth and veteran stars like Kylian Mbappe and Neymar make him an intriguing candidate for Old Trafford.

Current Tottenham boss Mauricio Pochettino is also on the list of candidates to fulfill the manager role at Manchester United. He was linked with the Red Devils as a replacement last year with the firing of Jose Mourinho.

While Spurs finished Champions League runner-up last season, this year is looking less likely of a repeat. Bayern Munich defeated the North London side at home 7-2. Spurs also got eliminated from the Carabao Cup by the fourth division side Colchester United.

With Tuchel and Pochettino hard to prise away from their current clubs, at least in the short-term, we believe that Massimo Allegri is the likeliest candidate to replace Solskjaer in January.

That means Allegri will need to cut short his one-year sabbatical.

However, we wouldn’t be surprised if Allegri succeeds Pochettino in North London after the season while the Argentine tries his chance up North or elsewhere.

Man United back Solskjaer despite worst league start in 30 years