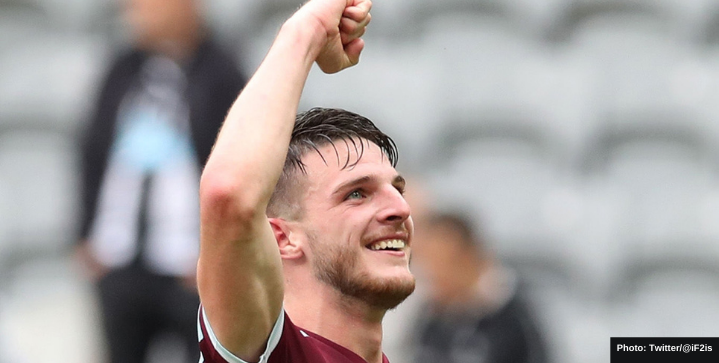 Pogba’s contract expires at Old Trafford at the end of this season. The Frenchman has repeatedly snubbed long-term contract extensions at Manchester United to remain a free agent in next summer’s window.

PSG and Real Madrid are Pogba’s likeliest destinations although a return to Turin could also happen.

Rice is Solskjaer’s top target for next season

According to Manchester Evening News, the Red Devils are already outlining ways to snatch 22-year-old Rice from West Ham. The midfield maestro has already spoken to England teammates Harry Maguire and Luke Shaw about a move.

United previously decided against signing the Rice this summer due to other priorities. The Red Devils famously re-signed Cristiano Ronaldo on deadline day.

Chelsea, who let Rice go at the age of 14, are also monitoring the player. Rice has emerged as one of the top ball-winning midfielders in the Premier League. Rice’s best friend, Mason Mount, plays at Stamford Bridge. Thomas Tuchel is also an admirer of the midfielder.

West Ham placed a minimum £100m transfer bid on Rice this summer due to the Englishman’s rising popularity. Sources say United could offer Jesse Lingard as part of next year’s negotiations.

Rice scored his first European goal for club this week, going on a remarkable solo run against Dinamo Zagreb in the Europa League group stage. In doing so, 22-year-old Rice became West Ham’s youngest scorer in major European competition since Frank Lampard in the 99/00 UEFA Cup.

The game also marked Rice’s 150th match for the Hammers.

Declan Rice who runs from his own half makes it 2-0 to West Ham ⚒️ pic.twitter.com/pXpevhzT8L