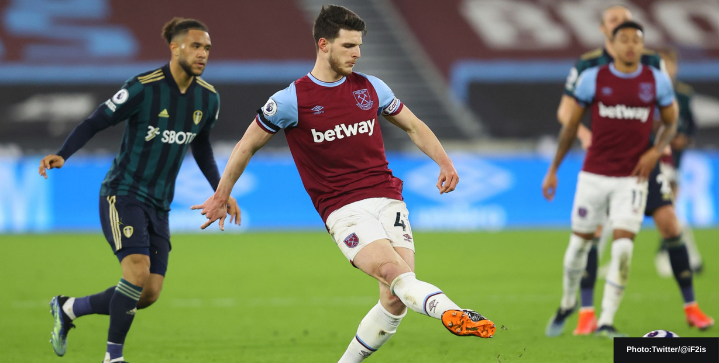 Manchester City are considering a move for Declan Rice if Fernandinho leaves this summer, according to The Times.

Fernandinho’s contract expires at the end of the season. Man City offered the club captain a year-long extension but the Brazilian refuses to decide his future until after the Champions League final.

Rice, also linked Manchester United and Chelsea, is seen as a capable replacement for Fernandinho. But Hammers boss David Moyes insists that Rice isn’t going anywhere, with the club placing a £100 million price tag on the midfielder.

Is Rice worth the price?

Rice has played with the Hammers first team since the 2016/17 season and appeared in 29 Premier League matches this term. His tactical flexibility and dependability have made him the hero for the East London side.

At £100 million, Rice would become the most expensive transfer in the history of Manchester City. The quality is there but the enormous transfer fee remains an obstacle. City signed center-back ‘brick wall’ Ruben Dias on a club-record £64 million at the beginning of this season.

Rice is currently out on injury for the Hammers but looking to return for the Brighton game next weekend. West Ham are looking to qualify for Champions League next season, sitting three points behind fourth-placed Chelsea in the Premier League.

Manchester United ‘confident’ in keeping Cavani for another season