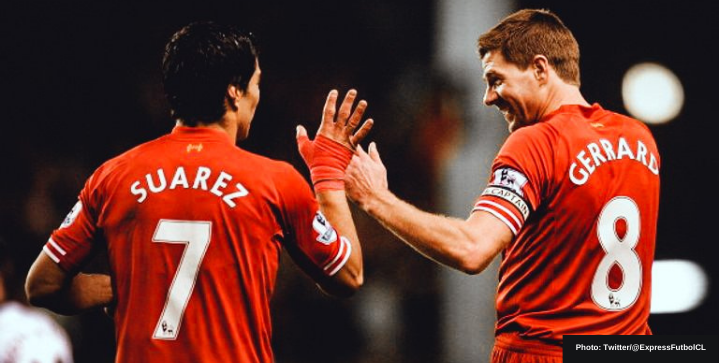 Luis Suárez has turned down several offers to leave Atlético Madrid to “focus” on a move back to the Premier League.

Reports in Spain indicate that the 34-year-old rejected bids from Brazilian outfit Palmeiras, Corinthians, and Atletico Mineiro. The Uruguayan has his sights on joining Aston Villa to play under his former Liverpool teammate, friend, and now Villains boss Steven Gerrard.

Gerrard continues his goal of getting the band back together. He recently acquired Brazilian ace, Phillipe Coutinho, on loan from Barcelona. Coutinho, who also played alongside Suarez and Gerrard at Liverpool, scored and assisted in his Villa debut last weekend.

But don’t expect a deal for Suárez to happen this transfer window. The striker’s contract ends with Atletico Madrid at the end of this campaign, making him a free agent this summer.

Gerrard once called Suarez “probably the best I have played with” back in 2014. The attacker tore up the Premier League, scoring 68 goals and providing 23 assists in 110 appearances.

Gerrard advised the striker to join Barcelona over Arsenal during the summer of 2014. It turned out to be sage advice. Suarez continued his goal-scoring form alongside Messi and Neymar, winning the treble (La Liga, Champions League, and Copa del Rey) in Blaugrana colors in his first season.

Last season, Suarez netted 21 times in 30 La Liga starts, including the go-ahead goal that clinched Atletico its first La Liga since 2014. Suarez is enduring a slow start this season, however, notching 7 goals in 13 starts thus far this season.

VIlla fans, how do you feel about adding Luis Suarez to the team?

The Premier League releases its fixtures for the 2019/20 season