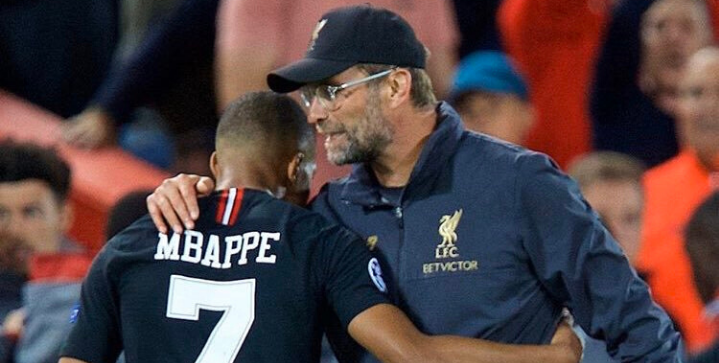 According to El Desmarque, Liverpool will enter the race to sign 20-year-old French phenom Kylian Mbappe from Paris Saint-Germain.

Earlier this week, PSG announced that it was going to offer Mbappe a massive new contract to fend off Real Madrid interest.

Mbappe is a long-admirer of the Los Blancos and compatriot Zidane — rumor has it that Real Madrid’s president Florentino Perez’s is also ready to offer PSG 300 million euros to seal the deal.

But the Reds may be looking to hijack the deal with a £215m mammoth proposal of their own.

“They can pay 250 million euros quietly,” writes El Desmarque. “And Mbappé would be given an astronomical salary, of more than 40 ‘kilos’ clean per season. That would make him the highest paid soccer player on the planet. This is a completely crazy proposal, and practically irresistible.”

Given Nike’s impending deal with the Reds as the club’s new sponsors and NBA superstar Lebron James (part Liverpool owner, Nike athlete) close ties with Mbappe, anything is possible.

However, Liverpool will need to make more funds available to bid for Mbappe’s signing. And that means they may have to part ways with their Egyptian star Mohamed Salah, who’s rumored to be linked to the Santiago Bernabéu.

Would Klopp really give up Salah or any of the other front three to land dream footballer Mbappe? Mane, Salah, and Firmino are all in their prime.

But Klopp made no significant transfers last summer and while Mbappe’s price tag is enormous (he’s contracted to PSG until 2022), it appears that the Reds could give Real Madrid a run for their money by offering Mbappe £34m per year.

Mbappe is once again in scintillating form this season, scoring 7 goals and snagging 2 assists in 206 minutes players since his return from injury. But as he mentioned last summer, Mbappe prioritizes winning Champions League over individual accolades. And to do that, he’ll need to leave Paris.

Ibrahimović “is being recruited by AC Milan” claims MLS chief