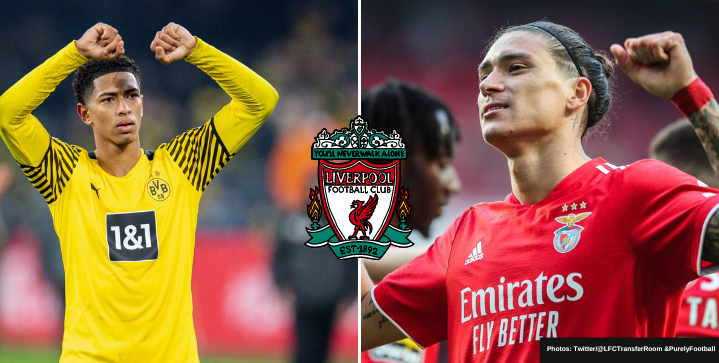 Liverpool’s summer transfer business is heating up with the club planning a double swoop for Darwin Núñez and Jude Bellingham.

The Reds, still reeling over their one-nil defeat to Real Madrid in this year’s Champions League, want to assure their return to the top of European football next season.

“Obviously, we have to try a bit more often than others, but no problem. Where is it next year? Istanbul. Book the hotel!”

Darwin Núñez could be the most expensive signing in club history

The Reds feel confident that the 22-year-old is ready to sign a 5-year deal with the storied club. According to the Athletic, Darwin favors playing for Klopp over Erik ten Hag’s Manchester United as the latter are not in the Champions League next season.

Nunez notched an impressive minutes per goal ratio of 84.39 during the 2021/22 season, only second behind Robert Lewandowski’s 84.31.

Next season, a front-three of Nunez, Diaz, and Salah could be giving Premier League and Champions League defenders nightmares.

Liverpool is also looking to add 18-year-old BVB starlet Jude Bellingham to their summer signings. The Reds lost out on the priority midfield signing, Aurelien Tchouameni, who inked a deal with Real Madrid earlier this week.

Discussions between the clubs have begun over the English talent, but the player won’t come cheap — BVB placed a £100million transfer fee in April 2021 on their rising star upon initial links to Chelsea. Bellingham’s contract expires in the summer of 2025.

Persuading BVB to sell another star gem after the German side lost Erling Haaland to Manchester City in May could also be another stumbling block for the Reds.

Liverpool fans, how do you feel about these two signings despite Sadio Mane likely on his way to Bayern Munich?