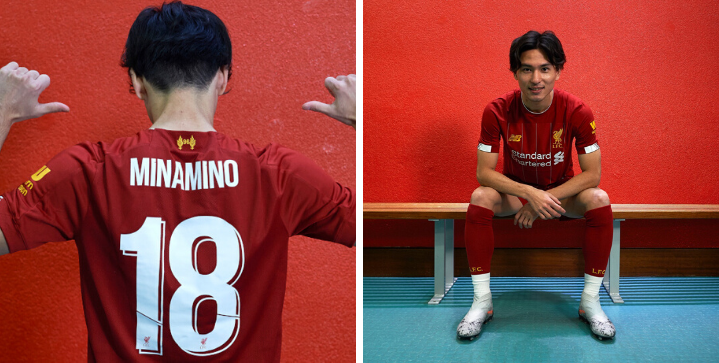 Liverpool have confirmed the signing of Japanese star Takumi Minamino from Red Bull Salzburg on a four and a half year deal worth £7.25m. The winger will join the Reds in the new year and wear the number 18.

The signing comes just nine days after the Reds knocked Salzburg out of the Champions League. It was Minamino, though, that put on the Austrian side’s most memorable display.

“It was difficult to play against Salzburg full stop, but I thought he was their main man,” said Liverpool fullback Andy Robertson on Takumi Minamino.

“He was the one, especially at Anfield, who caused us problems.

“When we went 3-0 up, he started to dictate the game,” added Robertson.

Where will the Japanese Neymar line up for Liverpool?

Minamino scored nine goals and notched 11 assists in just 22 appearances for Salzburg this season. Three of those assists came in Champions League play.

Minamino is a versatile forward that can play several attacking positions.

Minamino told the club website: “It has been a dream, my dream to become a Liverpool player. And I’m so excited that the moment has come true.

“But I never thought I would be able to play in this team and I’m really happy about it. I’m looking forward to it.”

Minamino’s signature makes Jadon Sancho’s move to Liverpool less likely, especially this January as initially reported. Plus, a £7.25m release clause on Minamino was a massive bargain versus the £100m demanded for Sancho by Dortmund.

Like the RB Salzburg Reds before him — Naby Keita and Sadio Mane — the new man Minamino be another gem in Klopp’s system.