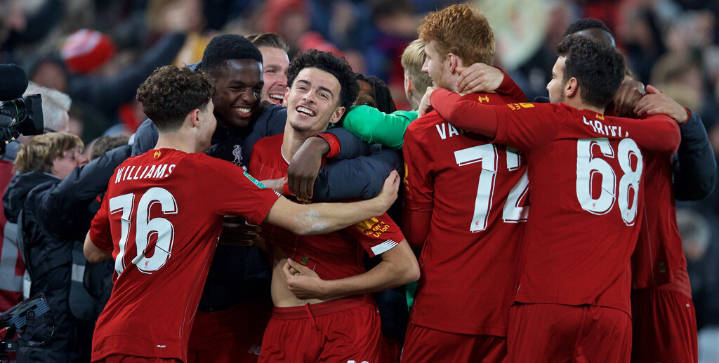 Liverpool defeated Arsenal 5-4 on penalties in what was a thrilling match in the Carabao Cup fourth round.

The game featured some incredible finishes from both sides — rockets from Oxlade Chamberlain and Joe Willock, a nifty turn and assist set-up by Ozil, and a fine equalizer from clutch striker Divak Origi.

Here are 5 things we took away from Liverpool’s dramatic win in the Football League Cup.

Divock Origi in on a tear the past 12 months. Part of Liverpool second XI, he’s shown up big occasions, most notably in his brace against Barcelona in the Champions League semifinals last year.

Tonight, he emerged next-level yet again in scoring two second-half goals for the Reds. His scissor kick equalizer in the 95th minute sent the game to penalties.

Unai Emery has frozen Ozil out of the last 6 games. But given Arsenal’s dip in form and lack of creativity, the Spanish coach had no choice but to start the German playmaker.

Ozil’s comeback tonight demonstrated why he should be starting more games. He earned a 92% pass success rate, a team-high 44 touches, and made two passes, one of which was a beautiful assist.

Despite Ozil’s good form, Emery pulled him out in the 65th minute for Guendouzi to go defensive. And the offensive attack suffered.

“We decided beforehand that it was better for him to have a rest. He worked really well for 65 minutes,” said Emery after the match.

Could Emery be saving him for this weekend’s game against Wolves? It’s anyone’s guess.

18-year-old Brazilian Gabriel Martinelli is the top-scoring teenager for a top-five European league club this season, striking 7 goals in 7 appearances in all competitions. Aubameyang, last year’s Golden Boot winner, leads the Gunners with 8.

Like Ozil, Martinelli must be one of the positives Arsenal fans can take away from the match. The teen’s desire and movements inside the box show flashes of a young ice-cold finisher like Luis Suarez. Martinelli is a #9 in the making.

In typical Arsenal fashion, the game appeared to be in hand. The Gunners were up 4-2 even after a Mustafi blunder in the first half. But the Liverpool kids came roaring back.

“I think a lot of people from the Premier League were sitting watching on television hoping Arsenal can do it. But I’m sorry,” said Klopp after the match.

Klopp added: “I enjoyed pretty much each second of the game, to be honest. I don’t know when I last had so much fun in a football game.

“I saw so many really good performances. I was so happy and pleased for the kid. Obviously, they will remember their first night at Anfield for the rest of their lives, and in the end they made it a proper, special football night.”

Arsenal have now thrown away three matches while up by two goals — the games against Watford and Crystal Palace in the Premier League both ended in a draw.

5. Another Liverpool-Arsenal goalfest at Anfield

Since the start of the century, Arsenal are the only side to score 5+ goals at Anfield. And the Gunners have done it twice, once in a January 2007 Carabao Cup match and tonight.

There have been 19 goals between both matches — 10 of which occurred tonight. There is something special about Anfield under the lights.

Jose Mourinho to replace Emery at Arsenal? It could happen, but should it?