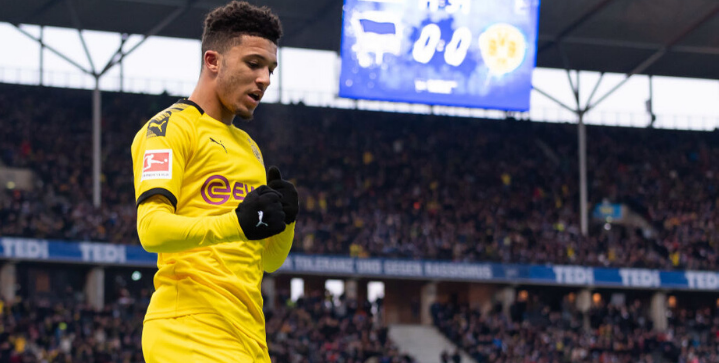 Re: Liverpool favorite to get Sancho

– player has no clause in his contract
– Dortmund got 90 million pounds when they sold Dembélé to Barcelona
– want more for Sancho
– sources say 130 million pounds https://t.co/xtKEFfluw7

The teenage sensation expressed his desire to leave Dortmund just a couple weeks ago after a falling out with the club. Dortmund fined Sancho €100,000 and suspended him for returning late from international duty in October.

The starlet most recently came off the bench for the Westfallonsadion in the team’s 3-1 loss against Barcelona in the Champions League. Sancho scored the team’s only goal.

Sancho is an ideal transfer for Klopp’s Liverpool

The Englishman is valued at £40 million more than Ousmane Dembélé who Dortmund sold to Barcelona for a then-club transfer record of 105 million euros. However, it’s more likely that Liverpool will offer around £100 million for the Sancho.

Sancho is an ideal player for Klopp, as the German has a proven track record with previous attackers including Robert Lewandowski, Pierre-Emerick Aubameyang, and current frontman Robert Firmino, Sadio Mane, and Mo Salah. Sancho is also a Nike athlete which dovetails nicely into the team’s new partnership with the sportswear company for next year’s kits.

The England international has enjoyed a stellar career in Dortmund, notching 20 goals and 32 assists in 54 starts and 74 outings across all competitions.

As Klopp builds his team for the future, what remains to be seen is what Liverpool may have to give up in order to snag another high-quality winger.