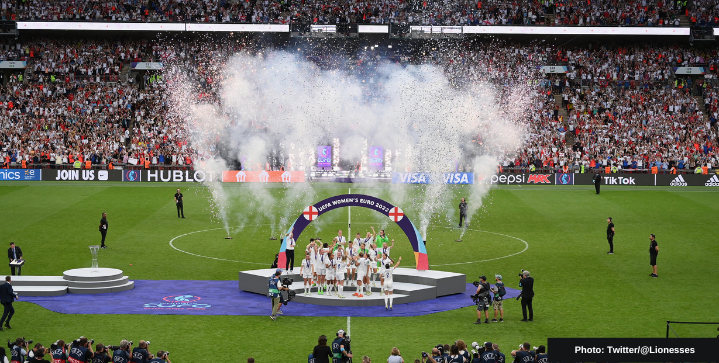 According to the BBC, a record television audience of 17.4 million watched England defeat Germany in the Women’s Euro final yesterday.

That’s 30% more viewers than the record set in 2019 when the United States defeated England in the Women’s World Cup semifinals.

Yesterday’s 2-1 England victory also became the most watched television program in the UK this year and the most-viewed women’s soccer game in the UK.

A record-breaking year in Women’s football

The Women’s Euro final also set the record for the third highest attended matches in European football this year with 87,192 in attendance.

The three highest attended matches in European football this season have all been women’s games.

Barcelona Femeni broke the team’s own record — 91,553 fans at Camp Nou for El Clasico last March — when the side hosted 91,648 fans for a Champions League semifinal victory over Wolfsburg in April.

From Alessia Russo’s miracle finish to England bringing it home its first trophy since 1966, Euro 2022 is yet another milestone in what’s been a record-setting year for women’s football.