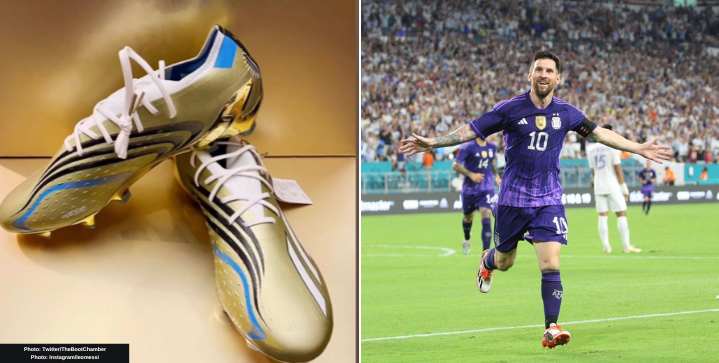 The 35-year-old s set to play in his last ever World Cup, making Argentina the hottest ticket at Qatar. A supercomputer has even predicted the Albiceleste World Cup champs.

With that possibility in mind, Adidas has designed one heck of a boot to celebrate the G.O.A.T.’s last dance. Be sure to check out Ronaldo’s new Nike Zoom Mercurial World Cup boots here.

Messi’s World Cup 2022 boots also get the gold and black stretched stripe treatment mixed in with white and blue stripes, much like the ones he wore at the 2006 World Cup.

All in all, Messi’s 2022 World Cup Adidas X Speedportabl signature boots look like a mix of Messi’s past F30, F50, and X boots.

The 2022 World Cup versions also appear to have the Sun of May, as featured on the Argentina flag, on the heel. The upper and soleplate also shine gold with a yet-to-be-determined color for the studs.

The limited edition Messi cleats go on sale on the Adidas website later this month.